Time of the season 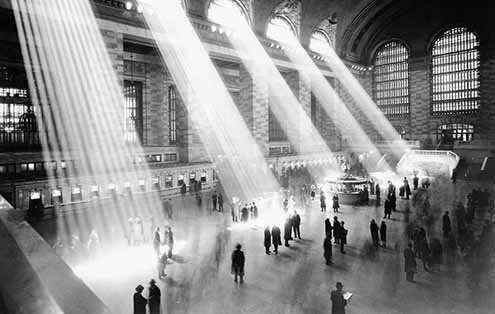 It's hard to separate New York City from the play of its lights.
W

hen autumn comes to New York City the sun is less direct and the light softer. Having given their all in spring and summer, trees finally relax and leaves begin to crisp and curl. Gravity does the rest.

It was two decades ago when I arrived in New York. It was time of year and season’s smells inevitably stir up memories.

I recall the first time I walked out of a subway station. Tall metal and glass planes stretched upward like fresh shoots from deep soil. Façades dwarfed the sky. Light skipped along their reflected mirrors and steel. The hum of human ambition rivaled that of honeybees in a field of wildflowers.

I was overwhelmed. Yet at the same time I felt both lost and found, large and small. How could this be? Contradictions seem at home in this city, I thought.

I entered the flow of foot traffic moving north. Or was it south? There was no stopping the pull. After many blocks, I saw the grey boulders of a church. I nearly missed it, tucked in-between a bodega and drugstore. I headed for the steps. Its spires seemed tiny, like small voices trying to be heard in the great density.

It was silent inside the sanctuary. I imagined a committed congregation building this mammoth structure with Gothic arches and rose windows. The stained glass must once have inspired awe and wonder. Now this grandeur is mere decoration. Outside, countless men in jackets and women in heels and briefcase push toward their offices, dodging taxis and delivery trucks.

Beside quiet crosses and haloed statues, I took out my map. I was blocks from my destination. Only later would I learn that New York offers no single final destination.

I was lost throughout my first year. I’d take the subway the wrong direction. I was frantic that I’d somehow slip through the city’s crack and vanish without a trace.

I gradually picked up the difference between trains headed north and south. Many times I arrived late and flustered, only to realize that was New York’s way of teaching you to walk. You fall down a lot, but you also eventually learn to get up, brush yourself off, and continue – and that’s a thrill like no other.

What stays with me nearly 20 years later are memories of dappled light, cool breezes, and remarkable vision of Vincent Van Gogh’s “Starry Night,” this time not in a textbook but right in front of my eyes at the Museum of Modern Art.

The city has changed over two decades. Some landmarks have been taken down, new and ambitious projects in their place. Rents are high and big brand stores fill spaces that smaller businesses once occupied. The throngs seem to grow larger by the year.

Yet the churches are still there, as is the stillness inside them. Crisp brown leaves still fall and crackle underfoot. Light still bounces askew and the fall trees relax.

Where was I headed that first day? Was it Times Square or Central Park? I don’t remember.

But it’s autumn in New York City, and I recognize it.