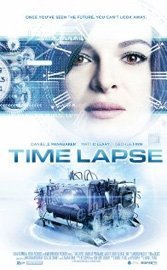 Finn (Matt O’Leary), girlfriend Callie (Daniela Panebaker) and Jasper (George Finn) are twenty-something roommates in a garden apartment complex. Soft-spoken building manager Finn paints, doe-eyed Callie dotes on him, Jasper bets on dogs. When scientist tenant Mr. B vanishes, the troika finds his machine — a giant HAL-like Polaroid contraption with a lens aimed at their living room. He’s been using them as guinea pigs in an experiment in which the machine spits out a daily shot of the room 24 hours into the future. Suddenly, with a leg up on time, Finn can paint, Callie can scheme, Jasper can bet and win. Until Jasper gets greedy and the threesome enter the clutches of a sadistic bookie intent on using the machine to further his earnings.

Co-writer and director Bradley Cooper’s fantasy thriller debut plays with time conceits in B-movie style until the idea runs out of gas — not hard given its dependence on a single premise (“So long as we see each other in that photograph, we know we’re alive tomorrow.”) Not surprisingly, there’s an abyss in store for those who just follow the cameras “orders.” Artist turns paranoid; bettor greedy; romantically spurned girlfriend devious: sinister fissures intercede.

Cooper is appealingly retro in his approach, with rotary phones and Polaroids, but he struggles to keep the serious from coaxing the silly, particularly as the macabre endgame becomes a foregone conclusion. The idea of being hijacked and manipulated by fortune telling is forever alluring. Here, however, the hijacked lose their appeal as they run of ways to outrun the evil they’ve been prompted to set in motion.