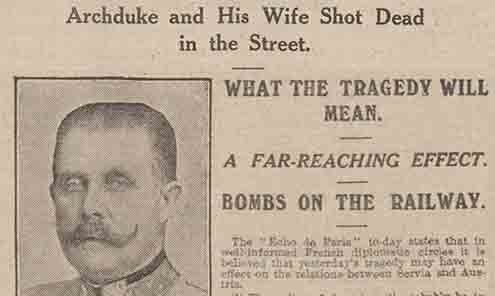 Gavrilo Princip's murder of Archduke Franz Ferdinand of Austria and his wife in Sarajevo on June 28, 1914 led to Hungary's declaring war on Serbia and opened the door to World War I.
T

he final assignment was not simple. The course had covered European history in the first quarter of the 20th century and students were asked to write a detailed paper on aspect of that history they found compelling. The guidelines called for a paper no longer than 20 pages, or about 5,000 words, though the recommended length was between 15 and 20 pages. The quality of the paper would make up most of the grade.

History fascinated me, so much so that I ranked it just behind literature among my course choices. This particular course had been by far the most engaging of my brief university career. I cared deeply about the result.

That made the paper all the more daunting. I’d never before written anything of such length. I pondered the organization before I even found a subject. How to effectively organize 5,000 words so that themes and assertions fit together? How to express my views without becoming tangled in annotation? It seemed like a dense jungle.

But I finally settled on a theme. I would examine editorials in three leading British newspapers in the month leading up to World War I, attempting to gauge if, amid the bluster, they had any sense of what lay ahead. I chose the Times of London, the then-Manchester Guardian, and The Daily Telegraph.

Early into the work I realized I had vastly underestimated the scope of the project. These were pre-internet days. My research soon led me into the microfilm archives of the New York Public Library and the U.S. Library of Congress. Days, weeks and months were consumed copying down salient commentary. On a few lucky occasions I was able to photocopy withered pages, or order copies. By the time I’d accumulated what I needed the paper deadline was three weeks off.

So began a frenzied stretch, each day making me increasingly aware the deadline was closing in faster than my ability to collate, think and write. A week before the hand-in day I visited the professor to ask for an extension, explaining my plight. I was give an additional weekend but told the delay would factor into the grade.

I went back to work. Ten pages became 15, which became 25, which soon turned into 40. I struggled to whittle down my findings. I worked to merge the comments of the day with my own observations. Soon, the paper took on a life of its own, sprouting parallel but separate themes I struggled to rein in. The final weekend — already past deadline — was boot camp condensed. But by Sunday night I’d finished.

What I handed in, somewhat confidently, was a 32-page document I’d typed and retyped until it emerged all but error free. I concluded the English press had badly misread where August 1914 might lead, let alone the potential human consequences of a war. I took pride in my accomplishment.

Two weeks later the students gathered to hear the professor speak about how she’d been impressed by the range of subjects, passion, and incipient scholarship. All in all, she said, she’d read some fine work. I imagined less-than-perfect marks because of my delay. What I did not imagine was failing the class. I did.

The assignment, she told me in a one-to-one session, was about one thing above all others: the ability to work within a specific word count, eliminating and editing ruthlessly until the paper fit the strict requisites. My lateness was bad enough. My giving her 8,000 words when she’d asked for 5,000 at most was a serious failure of rigor. Was the paper good? Yes, it was intelligent, she said. But it was also overwrought and distracted toward asides that blunted its strengths. Time and again I repeated myself, as if in love with each new assertion, unaware I’d already said as much five pages before. This love of my own voice, she said, would have to end if I had any chance of developing as a writer.

I never forgot that failure. I keep it mind each time I sit down to write. Later, as a news agency writer I learned to keep paragraphs short and dispatches and features pithy. Five hundred words is a plethora if the aim is to get to the point.

I wish 21st-century bloggers and even some mainstream journalists, birds of twittered feather now encouraged to flap online, would pause to remember some failure of their own — or borrow from mine — and tighten up.