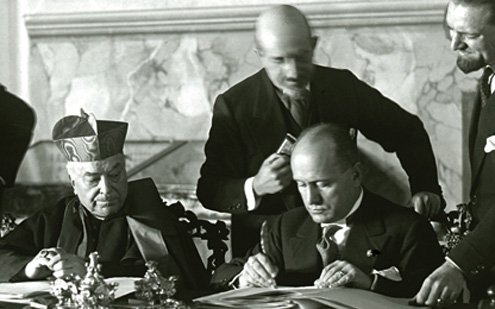 In 1929, the Vatican and the Kingdom of Italy, led by Benito Mussolini, agreed to make as little trouble for each other as possible.
I

knocked on my neighbors’ door at noon as planned, a bottle of Italian red wine in hand. D. opened up and welcomed me into her large and thoroughly decorated apartment. I was in the final days of a recent stay in New York City and they’d invited me over for a Saturday lunch. I’d already fallen in love with the Washington Heights neighborhood of Manhattan because of the friendly interactions with building residents and the invitation just made me love the city all the more.

D. and L. had been married for about a month and were excited to be starting a new chapter in Manhattan. D. manages a successful, green-friendly start-up and L. is a lawyer. We ate, talked, and laughed.

A week later, aboard a Delta flight over the Atlantic headed back to Europe, it hit me: Had I been in Italy, D. and L. would have not been married.

That’s because D. and L. are women.

New York’s streets boast plenty of same-sex couple holding hands. No one stares. No one judges. It’s the same in some cities where same-sex marriage hasn’t yet been legalized, such as Tel Aviv. But you don’t see it in Italy.

Not only is Italy the only major Western European state that has yet to legalize same-sex partnerships (Cyprus, Monaco, and all of Eastern Europe are also holdouts), it’s also a place in which the word “gay” is still used with suspicion and the same-sex relationships remain a controversial topic. Italy has a staggeringly high rate of gay teen suicides because bullying and is commonplace and young Italian gays have no identifiable social future. Even when high school ends, and the teenage bullying phase with it, what then? Get married? Adopt a child? Not really.

In Italy, even the union of same-sex couples legally married abroad isn’t recognized. These couples face daily discrimination. In an emergency, spouses are not treated as relatives, a recipe for bureaucratic complications.

Though Reforms Minister Maria Elena Boschi, 34, recently promised legislation that would allow for civil unions, the timetable remains vague. The government of Prime Minister Matteo Renzi still treads carefully on the subject partly in deference to Interior Minister Angelino Alfano and his conservative allies, once Silvio Berlusconi confidants. For Renzi’s center-right supporters, the prospect of groundbreaking social legislation is a threat.

Alfano got a boost recently when Italy’s highest administrative court, the Council of State, annulled a lower-court ruling approving the registration of gay unions contracted abroad. Former Rome Mayor Ignazio Marino set the challenge in motion last year by transcribing 16 such marriages into the city’s registry. Alfano balked, and won. Marriage was “non-existent unless it is between a man and a woman,” Council of State jurist Carlo Deodato wrote in his opinion, reasserting the existing Italian legal position.

Yet this kind of upper tier resistance doesn’t appear to reflect public opinion. According to a joint survey conducted recently by the Piepoli research institute and Turin’s La Stampa daily, 67 percent of the Italian population favors allowing for civil unions among same-sex couples.

So what is it exactly that’s taking Italy so long to pass legislation that would level the playing field for the LGBT community? Why do Italy’s political elite and a portion of its population refuse to equate gay rights with human rights?

Part of the answer that Italy’s capital city and legislative hub also hosts the Vatican, an independent and autonomous religious city-state that has been politically separate from Italy since 1870 but still exerts indisputable influence.

Though Catholicism was dropped as Italy’s state religion in 1984, the Vatican still comments comfortably on Italian political and social affairs, views that are devoured by Italian media. Though the Vatican has lost key postwar battles — on divorce (1975) and abortion (1981) — it has not been humbled. When an Irish popular referendum legalized same-sex marriage in 2015, Vatican Secretary of State and Cardinal Pietro Parolin called the vote not only an insult to Christian principles but also a “defeat for humanity.”

Legally, Ireland and the Vatican are separate political entities. The Vatican should no more weigh in on Ireland’s domestic legislation than Brazil should publicly debate Portuguese domestic affairs. But while Ireland all but ignored Parolin’s words, the Italian press paid close attention. As presumably did Council of State jurist Deodato, who calls himself “a Catholic jurist.”

History explains the interaction. Under the Lateran Treaty, or Concordat, signed in 1929 between the Kingdom of Italy and the Holy See, Italy — then under Fascist rule — was prohibited from interfering with the Vatican’s political agenda. But the Church was not similarly excluded from weighing in on the Italian political scene. Though a 1984 revision to the Concordat ended the Catholic religious monopoly, popes continued consulting with prime ministers. While Italy cannot and does not interfere with the Vatican (the Vatican is still exempt from property taxes), the Church still works to sway Italian public opinion.

In 2009, the Paris daily Le Monde published a piece by its Italian correspondent Philippe Ridet titled “The Vatican Invades Italy.” In it, Ridet noted the persistence of church-state ties, an anathema to secular France. “The Peninsula remains the ‘garden’ of the Vatican, the country in which it has established its line of defense,” wrote Ridet.

“The Vatican has always had a direct political influence on the Italian government,” adds Aurelio Mancuso, 53, president of Equality Italia, an Italian lobbying group. “The Church has an influence on several small parties on different sides of the political spectrum, both on the right and the left.”

Mancuso does acknowledge that Pope Francis I and his lieutenants have taken a less active role in Italian affairs than their predecessors.

More importantly, he also insists it would be a mistake to see the Vatican as the only barrier to same-sex union legislation. “The negative attitude towards LGBT rights also comes from the left,” said Mancuso. “The Italian left wing is not rooted in Socialist ideology, rather in the Communist one. It’s a moralist culture which has negatively influenced the local beliefs just as much as the Church has.”

In a 2007 study, Dutch scholar Ronald Holzhacker compared the Italian and Dutch models of political interaction regarding LGBT rights. He noted that while Italian LGBT organizations held to a “morality politics” model, the Netherlands preferred an “interest group” approach. Italian LGBT advocates often defined themselves as opposing another party or ideology (such as the Catholic Church or the Communist Party) while Dutch advocates strongly relied on lobbying and creating bridges to elites. While Italians preferred public protest, the Dutch generally sought ways of forging social cooperation between organizations and lobbies.

Western politics today tend to follow global trends, which means most countries sooner or later adopt parallel policies. On that basis, the Vatican assumption that Italy will indefinitely resist LGBT friendly legislation is naïve. It might be delayed, yes, but if Italy still wishes to be seen as on par with Germany, France, and England the question is merely one of timing.

Italy’s main LGBT organization, ARCIGAY, founded in 1985, openly states three goals: to fight homophobia, press the Italian government to legally recognize same-sex partnerships (not marriages, a term which would interfere with the traditional, Catholic institution), and to strengthen anti-discrimination law.

Italian LGBT organizations are too busy assailing the Vatican to create a new, tolerant, and pop-oriented ideology. Yet the more energy is spent on attacking the Catholic Church, the more that same criticism upholds the notion that the Church has a fundamental chokehold on Italian domestic policy.

The mistake may be in taking a vertical approach, focused on the “anti-,” instead of a more horizontal one. To get past the stalemate, Italy might do well to accept inspiration from LGBT lobbying efforts elsewhere. The world we live in requires transnational thinking. And the best way forward is to create rather than destroy.

— The author is a freelance writer who has published in The Jerusalem Post, Corriere della Sera, and Wired Italy.

About the Author: Simone Somekh