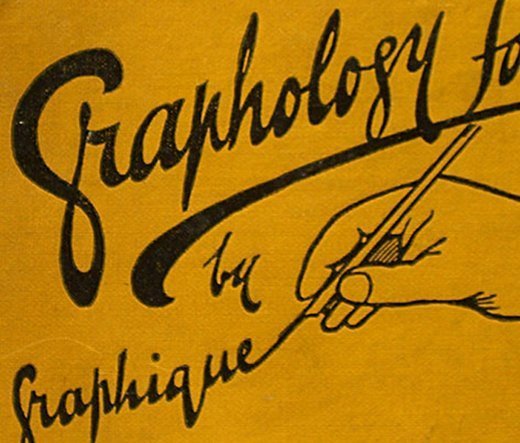 Once, your only mark was what your hand produced. And only the few were trained to make them.
W

hy should they be connected? Why should “a” flow into “b” and into “c” as if the three were bosom buddies? Why the need for alignment let alone the graph paper that did nothing but show I lacked any sense of precisely that alignment. I dipped and drooped and made a “b” that looked little different from a “d,” neither one of particular interest to my quivering hand.

The course was penmanship and I’d just arrived in the United States from France. I’d grown to age five speaking French but now it was time to change languages, oral and written.

Speaking came easily. I did it a lot, causing the teachers at the strict private school to write reports about precociousness and even insubordination, words I assumed, when my father read them aloud, to represent the highest possible praise.

The goal of the penmanship class was to teach students to write their full name and all manner of exciting sentences, including, in my case, “I am a good boy.”

But I wasn’t. My alignment was off.

Christopher looked like “Crilloffer,” not at all a bad given name if you were the Earl of Early, my secret title.

The goal of the penmanship class was to teach students to write their full name and all manner of exciting sentences, including, in my case, “I am a good boy.”

Girls, I noticed, formed letters far better than boys, with dutiful attention and a seemingly innate sense of balance. One girl, Ellen, wrote her name as a series of slender skyscrapers blown willingly by the wind. She reveled in this skill and laughed at the Crilloffers of the world. “Just keep your eyes on the paper,” she’d tell me.

So would the teacher, Mrs. Worms, who warned me that unless I learned, I’d fail to make a success of myself in the big wide world of English-speaking calligraphers.

Gradually, with help from a tutor who looked like a witch, the Earl of Early succumbed to the basics of handwriting. My sentences became annoyingly legible over time, as did my name. By fourth grade I spoke fluent English and could write a short essay with my name placed neatly at the bottom.

My right hand grew weary for the amount of writing I had to do in junior high school, high school, and even some college applications (no typed attachments, please).

Only at university did the typewriter take over in full, but not when it came to early love pledges, which were all handwritten on both sides. Passion revived old habits and my would-be true love once asked me how it was possible to “babble” in something — the cursed “d” reincarnated into “b.”

Digital days make such stories quaint. Handwriting, for those who still practice it, is a trick of the light that all find entertaining but no one needs. Name-signing is fading, and what still exists doesn’t call for much more than the once-illiterate “x,” just something to mark the spot.

Hands remain busy, of course, on pads and consoles, but whatever artistry they might have to show doesn’t last. Imprints are ephemeral. Crilloffer has vanished to a place from which there’s little return, since, in the roaming presence of an ample alternative script, no one wants him back.

It’s hard to imagine, but even the once-insubordinate and unaligned Earl of Early mourns this passing.