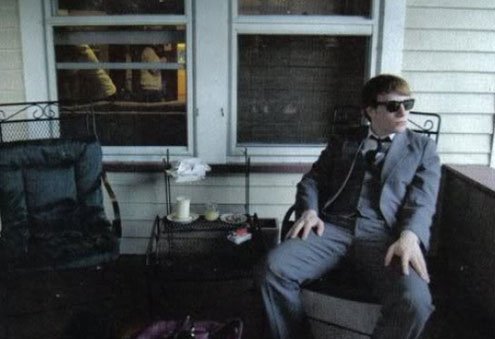 Mark McGuire is back to his old loops in "Along the Way" (Dead Oceans).
W

hen Mark McGuire announced his departure from celebrated ambient instrumental trio Emeralds in early 2013, it felt inevitable. The group was coming off the release of Just to Feel Anything, an unfocused and unconvincing album that sounded like an endpoint. As it turned out, the remaining members of Emeralds formally broke the band up within weeks of McGuire’s exit.

On his own, McGuire has cultivated a fan-base around the spectral sounds of Emeralds’ earlier days by way of guitar loops and layers. His second major post-Emeralds release is Along the Way (Dead Oceans) and it’s good for all the reasons you’d expect: piles of loops, long builds, careful melodic evolutions, little lyrical fuss.

What’s most interesting about Along the Way is its variation within the relatively strict confines of McGuire’s sound. It starts with a relatively simple guitar strum on “Awakening,” but in just under a minute and a half, McGuire has poured on a couple of synthesizers, a piano, a mandolin (or two?), and wind chimes. Its breezy melody segues right into “Wonderland of Living Things,” a radiant track that then segues into the folksy “In Search of the Miraculous.”

Throughout the album, McGuire varies the percussion and song lengths while never letting up on the general feel-good vibes emitted by his string instruments. Even when he piles on sounds and guitar repetitions, lightness remains. That talent for mixing has now undoubtedly hit its post-Emeralds stride.

On the opposite end of McGuire’s endlessly layered loops are the stripped-down and simplified saloon rock rumblings of D. Charles Speer & the Helix on their latest release, Doubled Exposure (Thrill Jockey).

Speer was born in Georgia as Dave Charles Shuford but made his name in 1990s New York cult outfit No Neck Blues Band. His work with backing quartet the Helix has been comparatively easier to digest, and with Doubled Exposure, he and his band take it a step further.

From rollicking opener “Wallwalker” to psych-tinged instrumental jam “Mandorla at Dawn” to the straight-up country of “Red Clay Road,” Doubled Exposure scythes to the chase with gallons of moonshine blues helmed by Speer’s guiding baritone.

Its focus makes it one of his better records as a result. Even 2011’s Leaving the Commonwealth seems comparatively weirder (but more excessively indulgent). That it’s taken years for Speer to hone down the Helix sound can only signal still better days ahead for the group.

Balancing the built-up and the stripped-down is Angel Olsen on her new record Burn Your Fire for No Witness (Jagjaguwar). This is her “loudest” record to date — much noisier than 2012’s Half Way Home or 2011’s Strange Cacti — but it’s just as confrontationally intimate as her previous material.

She has quieter songs where it’s just her and her guitar — “Unfucktheworld” opens the record on this note and “Enemy” is another more in line with previous recordings. But like Waxahatchee on last year’s Cerulean Salt, Olsen gives “Forgiven/Forgotten” and first single “Hi-Five” the benefit of a backing band to expand upon her sound.

Even with these changes, her emotionally wrought lyrics and occasionally yodeling voice remain familiar anchors. Take “White Fire,” whose stark opening of, “Everything is tragic / It all just falls apart / When I look into your eyes / Pieces of my heart” best focus the record’s themes. The breathiness of her delivery is at its most haunting here and it’s one of her best performances.

Well, that and closer “Windows,” whose four minutes showcase all of Olsen’s most attractive qualities: her range, her lyrical intimacy, her knack for melody, and her growing skill as an arranger. Burn Your Fire for No Witness is Olsen’s best record because it is her most expansive and approachable. You can’t afford to miss it.