Three Moments of an Explosion 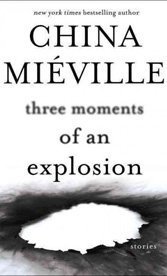 In 28 stories, hypnotic herald China Miéville organizes an earth of his own invention. His menacing planet reeks of surrealistic happenings presented in ways so resolutely deadpan and linguistically savvy that the known comes gladly to heel, petrified by its own awful veering. Historical and scientific assumptions — the stuff of the fact-based world — are stripped of their quilted comforts. Tyranny looms. Plagues beckon. Modern and medieval coexist and copulate. The center won’t hold because English archangel Miéville slashes much of its core matter beyond recognition.

The names and merits of the individual stories matter than their premises and themes, which spill out like shocking campfire stories. A future London exists under thick clouds of vast and brittle icebergs. The guardian of a medieval warren talks to his prisoner, a sulking god. Poker players win using arcane cards (the “Nine of Chains,” the “Ace of Ivy,” the “Detective of Scissors”). Archeologists quarrel over a dig whose contents contain the shared remains humans and their protectors, aliens. A psychotherapist doubles as a curing sniper. Carnival youths don the severed heads of butchered beasts only to fall victim to terrifying “intrusions.” Actors trained to mime symptoms (the “Association of Standardized Patients”) develop theatrical maladies of their own.

Melville is so meticulous in diagramming spheres and parabolas that it’s impossible to believe he’s wrong, or misinformed, or simply mad. Instead, his language gains momentum. A “newly-hatched” oilrig suddenly emerges from the ocean “on spudcan feet,” staggering into Canada “like a crippled Martian” (“It dripped seawater, chemicals of industrial ruin and long-hoarded oil.”)

Bosch-styled visceral visions (“burning-antlered stags sauntered down main streets…”) meet Marxist reeking, with each side taking carving turns. Towers of infinitely tall tubes in a future city are “complicit with vertical criminality, pirate payloads, tax evasion, theft.” “Ann Frank: Vampire” is a Hollywood action movie made by a Jew who is decapitated. An incurable pandemic sees sick people walk with their graves slotted beside them like ready-made moats, “the stigmata of new humans.”

It is Miéville’s Rod Serling-like refusal to capitulate to the hyperbolic that gives his metaphors, prophecies and parables that much more twilight zone clout. “Only humans dread. Dread is appropriate to nothing.” So it is that icebergs hover and thirsty oilrigs — “petrospectral presences” — lay eggs and walk.