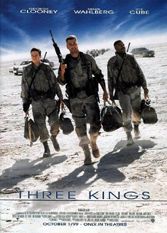 David O. Russell’s wartime heist caper not only refuses to revere Gulf War foreign policy and cheer the good guys but also makes a point of speaking out for those trapped in the middle. George Clooney, Mark Wahlberg, Ice Cube, and Spike Jonze (who directed “Being John Malkovich”) are American troops who seize a chance to go after a Kuwait gold stash in the waning days of Desert Storm. The problem isn’t the gold but the Iraqi civilians trapped between Saddam’s goons and the American pullout.

Stealing operates on many levels here, but Russell’s lesson is that while promises may mean nothing there’s cost in pretending they never existed. This is energetic, kinetic filmmaking that weds politics to action and tosses in immensely watchable stars. It’ll probably take years before Hollywood finds the gumption to deal similarly with Iraq.