Three kings and an old lady 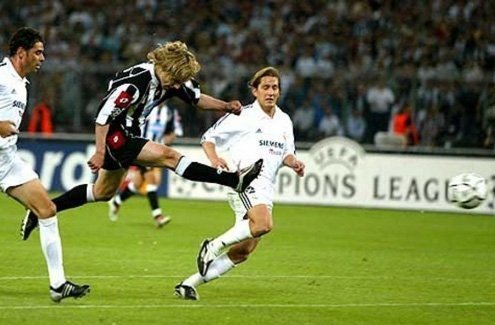 In the 2003 semifinal, Pavel Nedved helped Juventus oust Real Madrid from the Champions League. But AC Milan won the title.
I

t’s been more than a decade — 2003 to be exact — since Juventus last appeared in the semifinals of the Champions League. The Turin power now faces Real Madrid for a berth in the final against the winner of the Barcelona-Bayern Munich clash. But the home-and-away test against defending champion Real, while impressive, papers over a troubling reality. If Juventus is the big fish in Italy, it remains a minnow among European sharks.

Until 2006, when Juventus was demoted to Serie B for its role in the so-called calciopoli match-fixing scandal, the club was a regular member of the Champions League elite. While less decorated than either AC Milan or Inter Milan in European competition, the “Old Lady” of Italian football — Juventus, founded in 1897, is known as la vecchia signora — owns the last four Serie A titles. Its 31 domestic trophies put it well ahead of any other Italian club.

Yet Juve’s 2015 Champions League rivals, the kings of European football, operate in a separate financial stratosphere, with some of the deepest coffers in the sport. According to Deloitte’s latest “Football Money League” report, in 2014 Real Madrid generated a world-best €550 million in revenue. German champion Bayern Munich (€488 million) was in third, followed by Barcelona (€485 million). Juventus did top all Italian clubs and ranked 10th overall, but its €279 million revenue was barely half that of Real Madrid.

Understanding the financial disparity between Juventus — and Italian clubs in general — and Europe’s richest sides requires breaking down the club football earnings puzzle into its three key revenue-producing parts: match-day, broadcast and commercial.

Match-day revenues hinge on the number of home matches a team plays and the attendance at those games. The stadiums of Barcelona, Real Madrid, and Bayern Munich each hold at least 75,000 spectators, and are nearly full on a regular basis (Barcelona’s Nou Camp holds 99,000). The match-day revenues of the three clubs accounted for between €88 and €117 million.

On the other side of the spectrum, Italy suffers from an acute stadium attendance crisis. Though Juventus boasts the country’s most modern venues, it still has only a modest 41,000 seats, which have been only 90 percent full this season. The club’s 2014 match-day revenues amounted to just €41 million — though the team won all 19 of its home games last season.

Broadcast revenues derive from national and global fees paid by networks to televise matches and related content. The financial distribution varies dramatically by country. Spain is by far the least egalitarian, with Real Madrid and Barcelona gobbling up 11 times the revenue of lower rung teams. In Italy, the ratio is near 4-to-1, and in Germany roughly 2-to-1. The English Premier League model is the most equitable of the major divisions, with a narrow 1.6-to-1 ratio.

Of the three criteria, commercial revenue is by far the widest in scope and, when successfully harvested, the most financially lucrative. From sponsorship deals to memorabilia sales, commercial revenues are what set the five richest clubs in Europe apart from all others. The category depends on building and cultivating a domestic (and increasingly global) fan-base, monetizing that base, and then showing prospective sponsors its size and value.

But the revenue picture is more fluid than the three-faceted approach lets on. On-field entertainment value packs stadiums and sofas alike, with more eyeballs theoretically translating into better memorabilia sales and more eager sponsors. This system appears to operate most holistically in the England, while the big clubs of Spain and Germany have managed to carve out competitive advantages in at least two of the spheres.

In Italy, however, the three component parts are at odds with each another.

Decrepit stadiums and lawless, fanatical fans limit match-day revenues. Showing team colors can mean putting a fan in harm’s way, undermining memorabilia sales and discouraging potential sponsors. Serie A observers would be right to wonder if all the logo-less jerseys were part of some trendy counter-intuitive commercial strategy. They’re not.

That leaves television as the primary vehicle for football consumption. While Italian TV rights are relatively high compared those in Spain and Germany, cable subscribers can tune in to any game they want, exacerbating the stadium crisis. Add in Italy’s lingering economic recession, and you have a sport mired in a vicious circle.

Juventus has made great strides both on and off the field. But how much it still has to make up is far more daunting than the long odds it faces when it kicks off against the Champions League juggernauts.