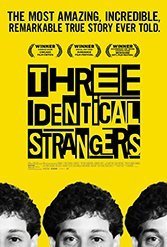 Director Tim Wardle’s “Three Identical Strangers” starts simply enough with the 1980 meeting of identical triplets who, until they are 19, do not know they have biological siblings, much less identical ones.

As this encounter unfolds, one triplet discovers that he appears to be a twin because they serendipitously attend the same college. Then the publicity from the two of them leads to their discovery of a third brother. The young men experience the joy of finding their identical (or nearly so) selves, move in together, open a restaurant together, and become celebrities together as their story becomes known.

The documentary juxtaposes home movies from the boys as they grow up in three very different family settings, not so far apart geographically, but totally unknown to each other and to each other’s families. The film deftly explores their psychologies, using interviews with them as they basked in celebrity and later, when the glow wears off, and as they are today.

But wait, there’s more. The placement of the baby boy triplets is itself a mystery, one presented with some recreated scenes. To say more would be to spoil the film, which has a depth to its story that Wardle unspools with suspense. The film won the Special Jury Prize in Storytelling at Sundance last year.

“Three Identical Strangers” would have benefitted from more exploration of the social and cultural norms of the era in which the boys were placed for adoption. With that caveat, it’s a worthy effort, a “stranger than fiction” documentary.