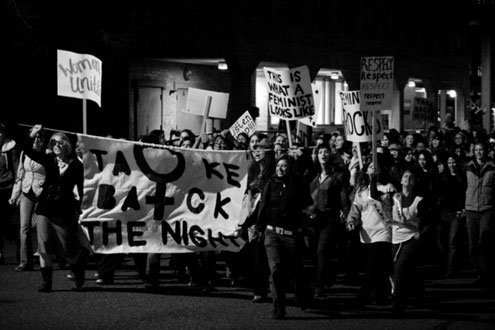 Take Back the Night protests were common on college campuses in the late 1970s and 1980s.
T

hree decades ago I was the college girl who craved the sort of male attention that went with the idea of being more grown up, the kind of attention often linked to the bad outcomes now inevitably labeled as rape or sexual assault. One such encounter, though it occurred in the Dark Ages of my late 1970s college years, probably did qualify as an assault.

In recent months, the debate concerning sexual assault on U.S. college campuses has gained momentum, particularly after Rolling Stone magazine published — and then embarrassingly retracted — a graphic story about an alleged gang rape at a University of Virginia fraternity house.

That all-consuming tale distracted from a recent U.S. Justice Department report showing a marked decrease in the number of sexual assaults on college age women since 1995. Most U.S. sexual assault victims, the report noted, were not young women enrolled in coveted or ivy-covered campuses.

Several aspects of the so-called “crisis” have struck me. The first is its familiarity. In my college years, “date rape” and acquaintance rape were newly coined words. Susan Brownmiller’s 1975 book “Against Our Will: Men, Women and Rape” spawned “Take Back the Night” campus throughout the country (“Rape is a crime not of lust, but of violence and power,” she wrote). The subject was widely discussed. My generation even had its Rolling Stone/University of Virginia scenario. In 1987, 15-year-old Tawana Brawley claimed that six white men, including a police officer, had raped her, a story with deep racial overtones. Her version of events was eventually discredited.

Both the Brawley and the Virginia stories came with their own stereotypes and stock narratives. The Brawley case occurred in an era when urban crime and crack cocaine mesmerized public attention. The UVA case got swift national attention mostly because of lurid sexual details that tapped into forbidden male and female fantasies.

For millennia, rape stories have fed deep but unconscious social responses to outside threats. Rape has long featured in war propaganda. In both world wars, posters tried demoralizing troops far from home by suggesting their wives and girlfriends remained sexually active and that the demon enemy’s real goal was to defile.

This makes the “geography” of the new crisis — elite college campuses — all the more intriguing.

If the Brawley rape case reflected worries about urban decay, inner city crime and drug abuse, the “new” rape crisis taps decidedly more middleclass fears. Women victimized by sexual abuse on college campuses are seen as being deprived of the careers and prestige their costly schools should instead nurture and safeguard.

The baby boom generation, educated from 1960s to 1980s, enjoyed college access that was both less competitive and less expensive than it is today. A college degree often led to jobs that catapulted graduates to pay grades higher than those of their parents.

Much has changed. Now, whether parents are upwardly mobile or determined to stand their socio-economic ground, they must spend 18 years grooming children for colleges they once entered with ease. No parent wants to see a child on the wrong side of rising income gap. High tuition and crushing student loans only heighten the anxiety.

Moreover, vocations that once guaranteed status and income, take law and medicine, no longer do. Nor do they rate high in the hierarchy of cool. Parents fret over college acceptance and some wonder if it’s even worth it.

The politically correct readers of The New York Times or Rolling Stone can’t openly express frustration or vent anger toward the minorities some believe are taking their “rightful” places on the social ladder, even though their resentment taps into precisely such worries.

The result can transform frat boys and Ivy League white men into “safe” lightening rods for rage. Those who delight in the idea of rot in high places or simply feel excluded can howl at the depravity of it all. This makes Ivy League rape a juicer story than anything that might happen at a community college.

A new generation of so-called helicopter parents — in constant if not anxious touch with children naturally sensitive to the slights and wounds of negotiating life away from home — is more apt than ever to jump into the fray.

The college application process also plays a role by encouraging aspiring students to “craft narratives” to stand out. A personal narrative is essential, though the need for one can carry potentially risky overtones.

Most college students are neither poor nor minorities. For them, a rape story is a feasible “oppression narrative,” particularly if the aggressors are privileged white males. Becoming a protagonist in a rape story can tempt notoriously narcissistic “millenials” into becoming the stars of homemade crises given the added allure of class conflict if an exclusive fraternity is in the mix. Young women may also enjoy the implication that males — however boorishly — desire them.

I am observing, not condoning. My own bad experiences reawaken anger and humiliation. One misadventure cost me my so-called best friend, who wouldn’t believe me because the boy I named was from upscale Greenwich, Connecticut and a friend of her sister’s.

Years later, I find my experience so unbelievable I still have to check my diary to make sure it happened, which it did. At the same time, it was also a useful and thankfully harmless life lesson, if a painful one.