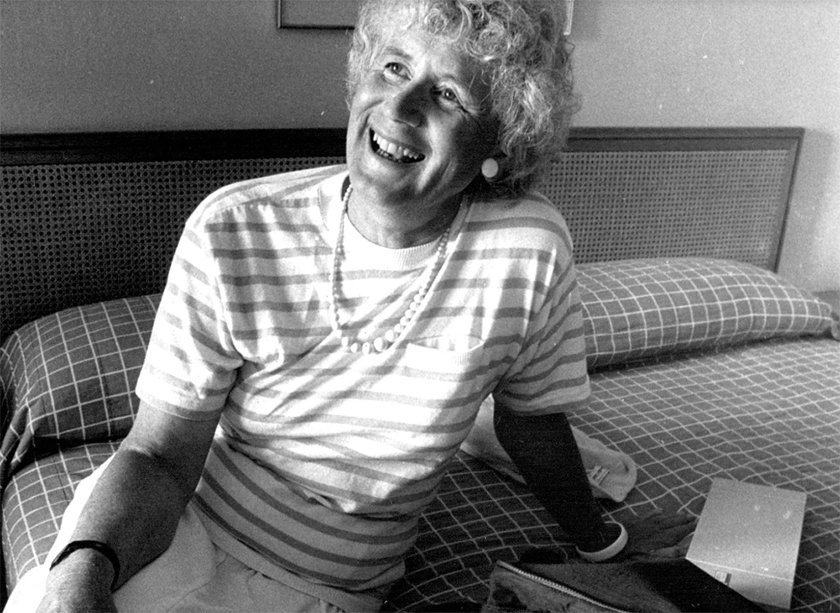 read little in my teens. Here and there a book about baseball while dabbling in my father’s set-aside novels, books by Graham Greene and Lawrence Durrell, the latter’s exoticism carrying me later toward poetry. I also liked travel pieces by the Welsh author Jan Morris (she died in November at 94), who wherever she trooped did so stylishly, with a keen eye.

Quite a woman, I thought.

A former man, my father remarked one day.

He matter-of-factly explained that Morris had changed gender, seeing herself as a woman in a man’s body.

This had little effect on me aside from wondering just how body parts were added and removed. Aside from that, I kept on reading. Jan or John mattered little.

I credit my father. Early on, in an obscure reference to homosexuality, he’d made a telling remark: “Love is love, and that’s it. All the rest is secondary.” The “rest” clearly included gender, and the ease of his gracious, open approach stuck. Two of his wartime spy friends, Bob and Donald, lived together in a Positano villa. I treated them as I would anyone else. Their copulating preferences made little difference to me so long as I could swim near the great rock by their jetty. They were cheerful, smart men, and gay as well, but in the 1950s gay meant something else altogether.

In any event, I was untouched by matters of gender and how it might relate to belonging to a society. In college, belonging, and personal identity, were above all ideological. You were the sum of how you explained your political creed, and your musical tastes. Beatles or Rolling Stones or Grateful Dead? The debate, political and musical, was lively but rarely spiteful, rarely mean.

The debate, political and musical, was lively but rarely spiteful, rarely mean.

That, at least, is how I choose to remember things. I lost my university’s top prize, an Oxford fellowship, to Ritchie, who was gay (it was 1971) and we had a drink (I had orange juice) to celebrate his good fortune.

Gender identity, as interpreted now, was not of critical importance, at least not in New York City at age 20.

I spoke recently to a young friend who sounded sullen on the phone. Why? I asked.

His closest female friend of several years had decided she was not at home with femaleness, or with gender labels, and had decided to become a boy, and later a man. All this was very publicly announced on social media, as is, or can be, the custom. When my friend paused, startled by this turn of events, he apparently failed, or so it is explained to me, to “validate” the choice, his bewilderment spun instantly into negation. He was swiftly branded a “phobe,” the friendship invalidated, and his personal presence — though real and daily — ignored. His shock and sadness was immeasurable. Attempts he made to explain himself were discounted: a friend apparently must “validate” without question. It’s a very sticky wicket all around.

Since such incidents are anything but rare, and I belong to a more naïve past, there was little I could tell him except that adolescence is a hard time for all, and all around. In my youth, playing pretend communist could get you in serious trouble, and cause you to be ostracized. This wasn’t a game, you’d be told. Don’t be childish when it comes to adult matters. But again, gender in the Jan Morris sense did not enter my picture.

Had I been called a transphobe I would have considered it an insult directed at someone who couldn’t bear transistor radios, and I loved them. “Phobe” and gender weren’t much on speaking terms, the word reserved for therapy or perhaps fear of foreigners, though I don’t remember anyone using xenophobe at the time.

Gender has clearly risen in rank since my young years, becoming something of a general in terms of personal perception. People speak of sexual fluidity, when then the only fluid was something else, and not as mentionable as it is now.

You were male or female, period, after which came matters of identity and predilection, which, I repeat, were largely artistic or political. If as a boy you preferred boys, so be it: so long as you didn’t say it too much aloud and made your position on the war in Vietnam clear, and on abortion as well. These positions shaped your intellectual identity, which then prevailed over gender. Did you recognize a woman’s right not to play by male makeup rules? If so, fine. Otherwise, explain why not and make ready for urban combat.

In the age of choices, which this is, all choices demand respect, perhaps even applause.

My girlfriends at the time wore little if any makeup and did not shave themselves. One I loved deeply turned out to prefer women, and left me. I was crushed but not resentful.

This I told my young friend, suggesting he hold the high school fort as best he could. I cannot imagine being expelled and rousted by someone angry at the perception that her gender-change is not applauded. It’s a bridge too far.

But this is a post-ideological age, and sexuality is blunter and more significant than it was when I grew up. Gender is essential to personality, and in the age of choices, which this is, all choices demand respect, perhaps even applause. The act of asserting change is one of boldness, of progressive-styled awareness, a dare to a world that previously appeared to have tied things up neatly in a heterosexual box. That box’s lid is off for good, and the yin-yang of adolescence will change as a result.

Do I like the change? That’s frankly irrelevant. I can only tell you Jan Morris, born James Humphrey Morris, wrote well. She had five children as James and was forced to travel to Morocco for her surgery, since Britain allowed no such operations. Yet none of this tinted her skillful words and zestful love of travel. All was rancor free.

Her craft, in an age before the advent of online gender fusillades, propelled her, mattering above all else.