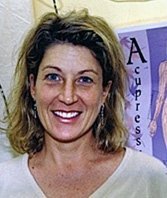 hen Jodi Wensel left Los Angeles for Rome and decided to pursue massage therapy here, she wondered if her non-traditional business would flourish. Was massage therapy a bit too “Californian” for Italy?

The answer to the question appears to be “no.”

Two years after her life-changing move, Wensel boasts a confidential client list that includes some of the biggest names in politics, as well as the odd ambassador and television personality. Not to mention more glitzy patrons like George Clooney and Brad Pitt.

The 41-year-old Wensel, urged on by her ex-husband, decided to uproot her life and try her luck in the country she loved and had visited repeatedly. “I came here with two dogs, two cats and a massage table and I thought, ‘Ok, what do I do?’ she says.

From her experience, massage in Italy was more of an aesthetic than therapeutic treatment. That seemed at odds with the deep muscle therapy Wensel used while working at the UCLA Medical Center.

Like anyone new to Rome, finding a niche was difficult. Then, a chance encounter changed everything. Wensel met Biba Canella, the owner of an upmarket boutique Luna A’ltra on Via del Governo Vecchio in the city center. Recovering from a broken foot sustained several months earlier, Biba confided that neither physical therapy nor acupuncture had helped.

The beauty of being an American not ensconced in Roman society was that she had no idea of her clients’ national fame, some of them ranking politicians in the Italian pecking order. “Half of them, I didn’t even know who they were until people told me, ‘Do you realize who you were just massaging?’”

Wensel’s image got a more public boost when she massaged Clooney and Pitt, in town last summer to film Ocean’s 12, the sequel to the Stephen Soderbergh 2001 hit. Recently released in the United States, the movie also stars Matt Damon, Julia Roberts, Andy Garcia, with a cameo from Bruce Willis, among others.

Wensel says the call to assist the superstars in distress came through an LA connection. Apparently dissatisfied with the massages they had received in their five-star hotels, both actors got Wensel’s name. “I had sweaty palms I think,” she recalls. “It was quite quiet, the only thing you could hear was my heart going boom, boom, and I was thinking ‘Oh my god I can’t wait until I get home and tell my friends.’”

She says Clooney and Pitt told her they’d use her again if in Rome, “which is great!” she laughs.

Wensel’s secret is called Myofascia Release, a form of massage that works on all the body’s physical trigger points. Muscular fascia is the spidery tissue that forms a tight coating around all of the body’s muscle fiber. When a muscle is emotionally or physically stressed it contracts, as does the fascia around it and the contraction grips like a glove, she explains. When any part of the fascia system is stressed or blocked, all other systems around it are also affected. Her brand of massage therapy involves stretching the fascia out to let the muscle encased inside it relax again. Each session lasts 90 minutes in order for her to work on the muscle mass.

After two years as a massage vagabond, Wensel recently found a studio for her clients, on a side-street near busy Corso Vittorio Emanuele. It’s a tiny oasis of calm, decorated in soothing cream colors and lit by candles. “People like it because it’s very discreet and that’s why the outside hasn’t been decorated in any way shape or form,” she says.

Though Rome is gradually starting to offer yoga and pilates, and herbalists are becoming a more common feature of city life, the Italian capital is not Los Angeles. Still, Wensel feels she’s appreciated here.

“I have not had one negative response,” she says. “It really makes me happy. The two professions I chose involve making people happy. It’s addictive by the end of the day.”

The first profession was importing and distributing flowers, which she gave up because of the physical demands of loading and unloading flower boxes.

She appreciates when people tell her they are feeling better, but the positive responses she receives from her massage clients aren’t always verbal. Actually, sometimes no words are used at all. She senses it. “I can take on their physical ailments. You feel them,” she says. “Sometimes I’m working on someone and I just want to cry afterwards, because they are bottling it all up. But I’ve learned how to take it on and then let it pass through me.”

Sometimes, she concluded, people say they feel “happier and lighter, like they are floating” after a long massage. Wensel smiles because she feels the same way.