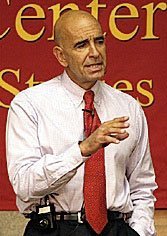 Thomas Barrack Jr. is the founder, chairman and CEO of Los Angeles-based Colony Capital and Colony Advisors, among the world’s leading global real estate investment firms. In June 2003, Colony purchased Starwood’s extensive Costa Smeralda holdings for $340 million hoping to develop the contested coast. Prince Aga Khan, spiritual head of the Ismaili Muslims, “founded” the Costa Smeralda in 1962, but environmentalists hindered his building efforts. Now, Barrack, 57, will make his own bid. A deputy undersecretary in the Department of the Interior under President Ronald Reagan, Barrack is a friend of Prime Minister Silvio Berlusconi and a supporter of President George W. Bush. Born in Los Angeles as the son of a Lebanese grocer, he first visited the Costa Smeralda some two decades ago intending to stay two days. He remained a week and has returned annually ever since. In May, he spoke to Kelly Carter. These are excerpts from their conversation.

You said it was ‘love at first sight’ with Sardinia. Is it smart to invest in something you love?

It is in a funny sort of way. I like extreme sports. I play polo. I surf. I look at that the same way as I do business. If I take off on a big wave I’m always anticipating that something is going to go wrong and I’m going to need to bail out. But I have a bail-out plan before I paddle into the wave. I know where my exit is. What happens between there and the exit is the adventure. This is not a commercial venture. This is an adventure of passion, and passion can work commercially.

So you’ll begin expansion in October?

You have this beautiful, elegant infrastructure that is charming and unique but hasn’t had any upgrades to it for 30 years. The first step is to make sure the base, the four hotels and Porto Cervo, are adequate and competent because that drives everything else. Our first goal has just been to evaluate the infrastructure and the effect on the environment… It’s not just that taking care of the environment is a good thing to do as a social act, it’s the only thing to do as a commercial act.

Haven’t you set yourself up for a huge battle with environmentalists?

I look at it totally differently. The environmentalists are my allies because they’re right… if you don’t listen to [them] and blend a consensus vision you have a real problem. It’s a partnership. Whatever happens, a key element is their being involved, and being invested in this process. Otherwise it won’t work.

Can your friendship with Berlusconi help smooth the waters?

I would never impose upon him. I think that Berlusconi has made clear his commitment to … Sardinia, where he has a home. The man is a visionary. He is a lucid businessman as well as a brilliant politician. I think he’s doing a tremendous job in attacking the big things that relate to tourism in Italy. He’s helping all of us, not [just] Sardinia… We’re equally responsive and friendly to the left, the right and to the middle. At the end of the day, what I tell them all is that we’re immigrants. We’re coming to a foreign country. What we have is cultural respectability. We understand that it’s not our culture and it’s not our country. As such, this process has to be conducted in a very slow and deliberate way with everybody buying into the program.

Do Sardinians feel part of the coast or look at it as a preserve for the rich and famous?

There’s a perception of a glass wall around Costa Smeralda, [that a] rich erudite group lives in an enclave separate from everything else. This all has to change. To the Aga Khan’s credit most people outside of Italy know of the Costa Smeralda. They don’t know of Sardinia. What we’re trying to start now is to breed local Sardinian entrepreneurs that we train to deliver the product that is going to need to be delivered — and this becomes their victory.

It’s a constant balancing act of trying to figure out what to do… Sardinians need a dose of reality. If you want to survive you’ve got to be competitive. So to the extent that they want to keep saying “no” to things that are competitive … they’re going to become obsolete. Tourists can choose from a myriad of venues. The whole Mediterranean is competing for that tourist. You can’t be arrogant and sit here and say, “Well everybody is just going to come to me.” They’re not all just going to come.

The Sardinians will say they like the island the way it is. But you say they will become obsolete. And they can’t eat. The bottom line is you have to have an industry.

Once you get Costa Smeralda to where you want it, will you sell?

No. Part of what makes people responsible is when they are also accountable… My hope would be that we would stay involved in the project for a long period of time … to get it through its next level of evolution.

What about stretching the summer season?

Everybody’s first inclination at every seasonal resort is [to stretch the season]. It also was ours. The problem [is that] airline and ferry schedules are built on seasonality, and seasonality is built on demand. So what comes first, the chicken or the egg? [Extending the season] happens but it happens slowly. It took St. Tropez 25 years.

Do you plan to add retail shops?

There’s a new retail center being developed in Porto Cervo, which will be terrific. What it needs is a village with a soul … a place where locals can go to buy bread and fish and play bocce and chess, sit and have a cup of coffee along the harbor. If you want to buy Gucci, Pucci, Versace, that’s no problem.

We’re working with the municipalities to create a local village that will be Sardinian-based with basically Sardinian products by Sardinians that will become a Sardinian version of Positano village. You end up with a great tourist attraction because it’s a great local attraction and that’s the kind of retail that is needed here.

Is one of your plans also to make Americans more aware of Sardinia?

Yes it is. Americans don’t know where Sardinia is. I’m amazed. That’s a big push. We’re making contributions to a lot of the big charities. We’re on that route.