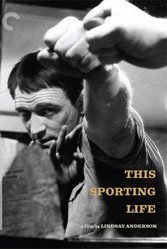 David Storey 1960 novel “This Sporting Life” told the story of a West Yorkshire coal miner who saw rugby as a way from inner earth to outer, from the ugliness below to a something better above. But there’s a catch. Rugby is the coal mining of sports. It’s fierce, bloody, unprotected (Storey once played professionally). All the more reason to praise director Lindsay Anderson’s choice of gritty Irishman Richard Harris as Frank Machin, the mean but needy hero.

Anderson, perhaps the most ambitious and best of the British New Wave directors, doesn’t sentimentalize Frank. A misfit while underground, he comes into his own on the field through brute strength and bad manners, both exploited by management (led by team owner Gerald Weaver; Alan Badel). He’s a gladiator, vain, coarse, abused and abusive.

He falls for his landlady, Margaret Hammon (Rachel Roberts), but while Frank wants love, she’s put off by his coarseness. She’s a grieving, embittered widow who sees Frank for what he is, “a great ape on a football field.” Anderson transforms rugby into a 15-round rite, with Frank molded into a depraved and money-hungry star. Despite paydays by team owner Weaver (whose wife becomes entangled with Frank), the hard knocks ethic of the mines resurfaces. Frank is ultimately wasted and worthless. “We don’t have stars in this game,” he tells Weaver’s wife, “that’s soccer.”