This Is Not Your City 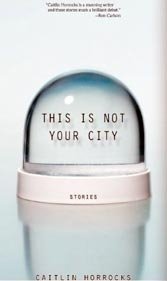 Caitlin Horrocks’ best stories possess a pterodactyl’s promising wingspan. The first ones are mostly melancholy accounts of simple Midwestern women trying to sift through the haunted side of uneventfulness. But Horrocks extends her reach in “Steal Small,” in which the wife of slaughterhouse worker grows unsettled by her husband’s second “job” — stealing dogs before peddling them to drug companies for research: “… He is molting into something new and horrible.” Next comes “Embodied,” in which a pregnant Iowa auditor goes about recalling details of her previous 126 lives, including several stints as men and one as a child drowned by her mother. She refuses to tell her husband that her love for him resembles the kind she felt as a husband in 12th-century China. Too many lifetimes tangle a reincarnated mother’s priorities, literally killing the future (“It’s an awful thing to live in a world that’s contracting, backing up on itself like a highway pileup.”)

In “At the Zoo,” the moral arthritis zigzags further. A patent lawyer worries about how to protect her impressionable son from a loutish grandfather — her father — who insists on fooling the boy into thinking weasels can hear space sounds. Horrocks suddenly fuses three generations of disorder. Insecurity, child-wonder and grief become a thick syrup with animals and madmen on its the gooey fringes.

The final story, “In the Gulf of Aden, Past the Cape of Guardafui,” poignantly presents a middle-aged Midwest couple on an Arabian Sea cruise filled to the brim with stories about their brilliant children. In fact, their only child is 10-year-old Aaron, who has a hopelessly broken brain. When pirates hijack their ship, the couple is forced from R&R pretenses they never believed in to start with. Horrocks may be young (this is her debut collection), but her wisdom can curl you at the edges.