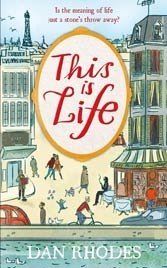 Rhodes’ early novels were gifted with eccentric narrators, including a wayward dog (“Timoleon Vieta Come Home”) and a half-Japanese Welsh lesbian (“Gold”). Then came a disappointing spoof on necrophilia and cannibalism (“Little Hands Clapping”), and now… this — a six degrees of separation romance novel intended as a sweet celebration of life’s randomness but closer in spirit to the Benny Hill school of British domestic comedy.

In a (long) nutshell, Paris art student Aurélie accidentally gets “custody” of a baby, Herbert, for a week. The baby’s presence makes her eccentric orphan friend Sylvie yearn all the more for a husband. Enter a visiting Japanese couple with a handsome son at home. Back to Aurélie, who has decided to photograph the loaned baby for her art project, meanwhile falling madly for a young man named Léandre, who may or may not be the naked, defecating star of a wildly popular personal installation called “Life” in which he is known only as “Le Machine.” Oh, and she shoots Herbert with Sylvie’s gun.

Loose ends are everywhere and most are eventually tied up neatly, leaving Rhodes to poke fun at France (whose president is Bruni-Sarkozy), Britain (“Life across the Channel seemed to be one big drunken mistake…”), Lady Gaga, and himself (Sylvie’s favorite book is Rhodes’ “Timoleon”). At its best, all this positivity reads like a zany, spoofing riff on Haruki Murakami; at its worst, it doesn’t read at all. Toward the end, Mr. president Bruni-Sarkozy, inspired by Le Machine’s fecal antics, announces France intends to “harness the power of human waste” as an energy source. It too often seems like the joy-stricken Rhodes has already managed that alone.