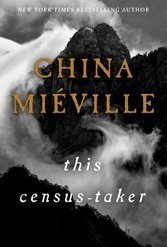 China Miélville is the anti-Shiva; a maker and not a destroyer of worlds. He frolics in the fertile crevices between science fiction, sorcery and metaphysics, wedding the medieval to the post-apocalyptic. Metaphors become him, as does the language of the wasteland. At his best, he’s a relentlessly inventive genius. At his less convincing, he leaves runic roadmaps at a reader’s door, daring them to decode the whole. This novella is of the decoding kind.

A boy who lives in hills portrayed midway between Stonehenge and modernity believes his father has killed his mother and tossed her into a pit. She is, the boy thinks, one of many victims his father has murdered and tossed into “the hole in the hill.” But the boy can prove nothing, leaving friendly gangs to lend him semi-judicial support and help to escape his mysterious father, a key-maker whose craft is closer to wizardry.

In this odd and Balkanized landscape of fractured towns and bat-eating villagers, “a petty hub on the route of mendicant salespeople,” and a place divided between uphillers and downhillers, the boy learns words and script and numbers, as well as about census-takers, who exist to count not only people but account for all which occurs on the planet. He befriends Samma, a girl, and Drobe, a boy. He matures an understanding of the planet as a place that exists after some “ordering of destruction” on a massive scale.

The boy, it turns out, is now himself a census taker, and charged with the catechism of his past, to write down, to order and number. But to what end? “The Hope,” he writes. And then “The Hate.”

This pointed arcane-ness has a hauntingly suggestive side, eliciting a place and time outside place and time (he explains street lamps, perhaps too quaintly, in terms of “unseen turbines spun fast to make this light that replaced the moon.”)

But there’s risk in the manufacturing of such places, and even Drobe, listening to a visitor, struggles: “I couldn’t follow what he was telling me and I don’t think he understood his own words at all fully…”

So it is with this story, vaguely about the creation of law, and of order, and modernity, whose footprints Miéville clearly understands but which he unwisely chooses to put forward in the abstract. “Thinking my own past self is mostly a mystery story,” says the narrator, speaking his typically fractured way, and so it is. But as creative as a writer’s mind can be, ambiguity for its own sake cannot be a reader’s only reward.