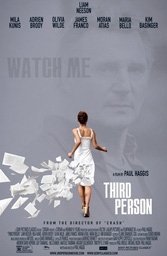 Novelists are trained to create and convey human conspiracies. What seems random is a set of contrivances waiting to be revealed. Here, the writer (and director) is Paul Haggis, who slowly reveals his conspiracy through Michael (Liam Neeson), a successful but uneasy novelist foraging for deeper meaning. Locked away in a Paris hotel suite, newly-separated Michael taps away at his next project, and from this tapping, albeit indirectly, come three vignettes, the first about former soap opera star (Mila Kunis) desperate to regain custody of the son she once harmed, the second about a businessman (Adrien Brody) who falls for a Rome grifter (Moran Atias) ostensibly in need of cash to reclaim her daughter from traffickers, and Michael himself, tumultuously involved with Anna (Olivia Wilde) a journalist who wants into the world of fiction and supplies the writer with dark-side density. Each character carries a bleak secret and each has been damaged (there are marital collapses, the death of child, incest and abuse.)

The events of the vignettes trigger Michael’s imagination, and Haggis’, as made-up author and real director switch between the narratives while leaving oblique, paper trail clues as to how they overlap. It matters little that the action is separately set in Paris, Rome (Brody) and New York City (Kunis), since one city is all cities when it comes to human hurt and the wreckage around it.

Haggis fascination with choice and chance is intended to pay homage to the tiered and melancholy European art films of the 1960s (think Antonioni’s “Blow Up,” which blurs the line between the seen and the known). Yet Haggis’ subplot hopping soon grows tedious, then grating, like piano scales played ad infinitum. Yes, the result is vaguely like music, but nothing like the connected concerto Haggis intends. Why? In part because aiming for transcendence can leave serious but unformed characters adrift, which is just what happens here.