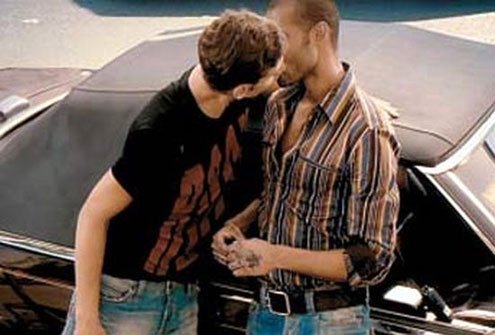 Dolce e Gabbana made their point.
I

t’s called the pink dollar. Gay people reportedly not only have a higher than average disposable income but are also willing to spent it on luxury items, grooming products and travel. Recognition of the gay consumer has opened up new product horizons in the fashion and cosmetic industry for men and expanded traditional hetero markets to include new travel packages specifically designed for gay people. Advertisers, it would seem, are scrambling for their piece of the pink.

I applaud those two guys in Milan, Domenico Dolce and Stefano Gabbana, who put their initials on every piece of designer clothing and accessory they sell. Their ad campaign “the kiss,” (my title), where one beefcake gives another a watch and a kiss, had a brief but groundbreaking run on Italian TV a few years ago. There was a similar “the kiss” campaign between two attractive women. I doubt these ads made it to North America, where it seems that only milk can carry the label “homo” without being tainted.

But there’s another side to “the kiss” ad between women. Marketing to gay women can have the collateral effect of fueling hetero male fantasies. Thus someone’s romance gets twisted into someone else’s voyeuristic pleasure, objectifying and alienating the consumer for which it was initially intended.

Some marketers assume its okay to play on homophobia and make gay people the brunt of their joke. Consider the ad for a German cheese-flavored snack called “Fonzies.” Two boys sit side-by-side watching girls at a party. While girl-watching, they both put their hands in the bag of snacks at the same time. Their hands touch. Still lost in the sight of girls, they sigh. They then realize they’re touching each other. Shock! They pull their hands back. Cheap shot.

Other producers want it both ways. When I left Canada almost a decade ago, a magazine campaign for a popular a coffee-flavored alcoholic beverage pictured real drag performers, not models, enjoying an after-work cocktail. The caption said something about being an original.

Shortly after I arrived in Italy I saw a new TV ad for the same product. This time, the lights go out and someone plants a deep kiss on a young man’s mouth. The lights come back on. Directly in front of the man is a handsome man. Shock! Then the recipient of the kiss sees it was all a joke. A busty young woman standing behind the handsome man had planted the kiss. Everyone laughs.

At first I was outraged by the homophobic cheap shot and blatant two-faced betrayal by the beverage producer. On second thought I realized that I might have been overreacting. Maybe I’d misinterpreted the ad. Maybe it could be seen as a public service announcement-reminding woman to take care of any nasty razor stubble before snogging (sucking face in “American”) some guy in the dark, lest they be mistaken for his boyfriend or brother.

Speaking of razors, a while back a famous razor company produced a series of TV ads apparently targeting a younger hipper male consumer. They presented a visual reenactment of what I assume to be a hetero male fantasy. A young man shares his high-tech shower with a chrome female sexbot while she caressingly shaves his face.

But the ad made me worry for public health and safety. Wouldn’t a sexbot in the shower put the user at risk of electrocution? And how to explain a sexbot to parents and friends when they popped round for a visit?

Not long after the razor ad appeared on TV it also turned up in print in “GT,” my favorite English gay magazine; same fit young man, same female sexbot. It seems that the razor company marketers realized that gay men also have beards and money. Unfortunately that was the limit of their understanding. Someone forgot to tell them that gay fantasies might be just a little different.

As a gay man with a beard, all I want is an affordable razor and that doesn’t remove layers of skin or leave me with a face full of ingrown hairs. Without wishing to sound anti-sexbot, I’ve never had a good relationship with high-tech. I prefer romance with real people.

Still, the next time the shaver boys are looking to entice gay men to spend their hard-earned cash they might want to consider making the sexbot male.