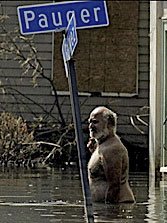 New Orleans in the lawless time of Katrina is what a nation spent a century trying rationally to retire to archives and museums.
A

few days ago, a reporter from The New York Times found a rotting corpse in New Orleans. The discovery itself was unoriginal: The city is ruined after all, like one of many victims of some ancient Yangtze spillage. Floods are history’s most ambitious natural killers.

But the reporter did not see China.

And that’s the point.

“What is remarkable,” wrote Dan Barry, “is that on a downtown street in a major American city, a corpse can decompose for days, like carrion, and that is acceptable.”

This was not Baghdad, not Rwanda, he reminded his readers. This instead was the “post-apocalypse” in America.

The Katrina Complex hinges on those words — in America. A culture of addition does not subtract lightly.

Katrina is harder to digest than September 11 because it erodes optimism and heroism, the sentimental values that defend American righteousness in the way the Van Allen belts shield Earth from meteors. Four years ago fire fighters were drafted to save America’s maidenhood: They were anointed Heroes of the Inferno.

Eliminate obvious heroes, tamper with the filter, and America, though deeply generous, cannot quickly find the tools necessary to rationalize its susceptibility and make itself over. At that point, emotion’s only escape hatch is recrimination.

Some say the prelude was handled badly, others single out the aftermath. Most say both. Welfare state haters and antediluvian (not for nothing, the word) racists insist the prophetic flood didn’t come a moment too soon, cleansing the wretched. Conservatives enraged by the sight of armed looters and prowling vagrants see a razed New Orleans as a fit place for domestic empire building.

To this, the socially conscious cry shame — though their disdain spills from milk-fed citadels. The black poor, they say, bore the brunt of an inattentive, incompetent government that has only contempt for those who reside in the margins of the state. The ill-buttered lowlands of the American netherworld don’t interest the entitled caste, though privation rears scores of soldiers who fight for democracy (and ironically, the rule of law) in Iraq.

Katrina is an emporium of literal mud that may soon cost some politicians their figurative lives.

Frustration is partly to blame. In a more militant time —1968, say —blacks and whites might have taken to the streets demanding greater government accountability or drastic redress. But public catharsis is not in vogue. It is sufficient to televise and to probe, to blog and to bemoan, to flood the flood with enough material altruism that collective decency forms a levee against residual guilt. The American Red Cross, an estimable organization, knows how best to tap the zeitgeist: “Be a Disaster Relief Hero,” proclaims one of its many advertisements.

Donation is a sincere and vital public response. A consumer society basic on civic values knows no gladder and giddier expression than ungrudging, good-faith charity. At the same time, America’s ambiguous appreciation for overseas help reflects national embarrassment at the idea of needing ever to need, which suggests dependency.

Barry himself gets at the reason: Decomposing bodies in a post-apocalypse city is unacceptable.

It’s an insult to the anxious who thought they saw the worst four years ago.

Now this, a city that Barry calls “half baked and half deluged: pestilent, eerie, unnaturally quiet” with “severely damaged streets [that] bear the names of saints who could not protect them.”

These flourishes are lifted extravagantly from the South’s own rhetoric and are encouraged by newsprint’s inability to compete with relentless television and web images.

But they also stake a risky claim on inference.

The glib portrayal of a city inhabited by the mad is an impish concession to 19th century journal-writing. The aim, then as now, is to juxtapose enlightenment against decay. New Orleans, always bacterially edgy, is the best of tools.

But the core message is the same. Modern Americans have not been in such a place before, nor should they be. New Orleans in the lawless time of Katrina is what a nation spent a century trying rationally to retire to archives and museums.

For years, Americans have browsed best in the world’s shop of horrors, mining fiction from the lurid: Diaspora, earthquakes, meteors, plagues, nuclear terrorism and conflagration — all were fair game.

But fictionalize catastrophe long enough and the senses are segregated. The real is hard to imagine. Stoicism, irony, and grim humor, intellectual sandbags against tragedy, lose their bite and their relevance. All that’s left is immediacy and drama, and within them cliché.

September 11 was not unimaginable. Nor is Katrina.

But to the affluent and the orderly they were, and are, unbelievable.

Now, for lack of awe, comes the deluge.