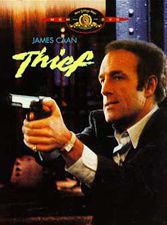 The first in a string of disciplined films that would make Michael Mann into one of the most stylish directors in America (“Heat,” “The Insider,” “Collateral”). Here, he taps James Caan as Frank, a professional thief with a reputation for thoroughness. Released from prison, Frank reluctantly agrees to pull a major Mafia diamond heist in L.A. as a prelude to quitting the business to care for an (illegally) adopted son. In film, retirement is a harbinger of trouble, and Mann handles the tidings no differently.

But Caan’s the man here: His Frank is in a state of constant pre-furiousness. Only when he tells his life story to wife-to-be Jessie (Tuesday Weld) does he show the slightest hint of vulnerability. The 10-minute break-in scene feels like one unbroken take because it is, shocked forward by Tangerine Dream proto-techno track. The movie is dated, but Caan’s work isn’t.