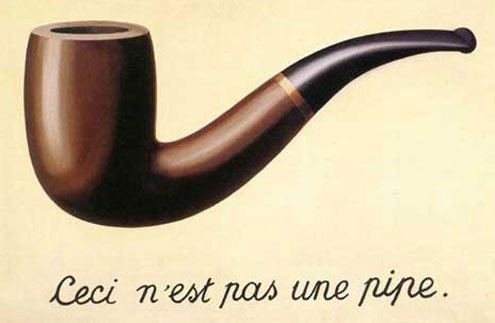 rench eccentric Philothee O’Neddy got a leg up on High Definition. No fuzzy dreams for him. He wore his glasses to bed.

Fast-forward to the video age. In it, my thoroughly modern Italian friend shows off his giant new HD TV, whose waterfall-sized screen looks like an animated cathedral fresco. He’s thrilled by its wafer-thin frame (much like his girlfriend’s).

As he runs his fingers along the edges, I hear rats in my mental gyroscope. Is Surrealism dead? I wonder. And if it’s not, how exactly does it fit into the HD world? Where’s the messiness and fancy? Or even the fumbling, high-tech primitivism of the Moon landing? When you’re compelled to see clearly, when clarity becomes the sole and institutional purpose of daily vision, where’s whimsy’s wiggle room?

Where, for example, would Magritte deposit his non-pipe? More to the point, would the “non” part matter to HD, whose mission is confined to making the pipe seem realer than ever before?

My friend taps buttons on the black and silver remote (“This is so cool. I love remotes!” he announces) and browses HD channels and movies, showing off the fingerprint-like texture of film faces (I can see a famous actor’s previously concealed pimple) and the pure detail of sports figure (one is sweating; should he dry his brow?). He then switches to a Grand Canyon video, where serrated ridges put to rest my beautiful fear of scorpions. The images possess human awe and don’t let go.

Which partly explains the rats afoot in my gyroscope.

Surrealism and its associated artistic schools intuitively arched their backs at science, fearing the prevalence of explanation and control. It put lobsters where dogs were, or dogs in clouds, or conjured obliquely colored blurs to reflect the warping of speed. The impossible juxtapositions, illusory relationships, and visual absurdities were generated to protect imagination from greedy objectivity’s rational supervision.

Yet Thibault loses more ground by the day. Redefined as visual escapade, imagination is most often a mental cab ride. Canned exaggeration and sublimely created fantasies stand in for individual eccentricity. Proof of public jadedness came on September 11, when what seemed like a bad-taste disaster movie suddenly renounced fiction. Disbelief’s dismantling triggered human fission in the form of urban hysteria, the first postmodern human-atomic bomb.

Artistically, the swapping eccentricity and surrealism for mass-market sharpness and prefabricated awe costs daydreams their soul. However well-intentioned — science’s eternal caveat — soon-to-go-global HD is yet another imagination-buster, sublime pixels tempting and training eye and mind to revere ultra-focus as the latest golden calf.

Such focus would exalt Pollock’s art based on its TV sharpness, Alice’s looking glass rabbit for its lifelike fur, Thibault’s crisp claw for its clarity. Why factor in subversion when resolution is its own belief system?

But trading in the looking glass also means surrendering idiosyncrasy to 20/10 vision.

“With HD everything’s so amazing, so awesome,” says my friend. “I feel like I’m seeing things I’ve seen before for the first time. Want to watch ‘Alien’?”

No, I don’t. The film troubled me enough on first viewing, a chilling recollection that led to poems. I need no better mousetrap. My mind has settled on personal perversions.

Instead, I focus on the Magritte replica my friend has hung in his dining room. The painting is called “Time Transfixed” and shows a locomotive emerging from a fireplace beneath a clock. “In order for its mystery to be evoked,” wrote Magritte, [I needed] another immediately familiar image without mystery — the image of a dining room fireplace.”

“Who’s that?” my friend replies, turning up the volume.