They Shoot Horses, Don’t They? 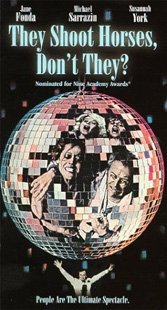 Downer isn’t the word. Depression victims Gloria (Jane Fonda) and Robert (Michael Sarazin) try to make a buck in marathon dancing, the dance-till-you drop “fad” that along with other follies occupied the paycheck vacuum that was the 1930s.

Also dancing for cash is pregnant farm girl Ruby (Bonnie Bedelia) and husband James (Bruce Dern); a sailor named Harry (Red Buttons); a would-be actress called Alice (Susannah York). The dance MC is Rocky (Gig Young), who revels in this cruelty to (human) animals (“I may not know a winner when I see one, but I sure as hell can spot a loser.”) Much about Sydney Pollock’s movie is unremarkable, even predictable (from Horace McCoy’s novel), but thanks to Fonda and Young it nags and nags at the underpinnings of hype and humiliation until it gets someplace interesting. A nurse to done-in Gloria: “Can I get you something for your feet?” Gloria: “How about a saw?” Don’t think she doesn’t mean it. Gloria was among Fonda’s best creations.