There Once Lived a Woman Who Tried to Kill Her Neighbour’s Baby: Scary Fairy Tales 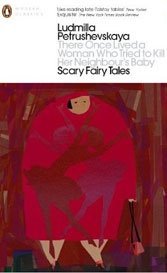 By Ludmilla Petrushevskay, translated from the Russian by Keith Gessen and Anna Summers

Happily ever after are three words Ludmilla Petrushevskaya’s fables chew on but soon spit out. Her 19 stories are miniature carnivores that either devour lives whole or usher them into dream-state realms where they loaf around like rueful zombies. In her fairy tales, allegories and requiems, doctors send mothers to hermits to make droplet-sized daughters grow, fathers find their families by living life in reverse, dead men rediscover the long-gone daughters by eating human hearts, guilt-ridden women are made whole by imagined vagrants, labor camp refugees are exiled further and further outland until the details of the outland begin repeating itself ad infinitum. Her juxtaposition of bizarre marvels, the world of a verbal illusionist, is endless — behold the unhappy, 17-times married wizard. Unlike Latin-world magical realism, Petrushevskaya breaks entirely free of the real and wanders in a self-made dead zone whose incredible inhabitants are vivid though they never fully graduated from the mind of their creator. In story after story, they are ghostlike toy soldiers who fulfill individual narrative missions, whether to explain loneliness or commute suicides.

Petrushevskaya is not a moralist. Nor is she sentimental. It is the death of a child or the shortage of food, shortfalls too desperate for most human minds to rationally fathom, that open into her fairy tales, which have a maw and teeth, or indulge comic cruelty (the obese woman — and circus strongwoman — who fears losing weight because to do so might kill the twin souls that flourish within her). This is artful and absurd Russian fatalism that emerges through madness, with madness often the result of wild grief.

Petrushevskaya, unable to publish in Soviet Russia until the late 1980s, once labeled Russia “a land of women Homers,” to whom she listened. Here, she’s put her ear to a great crib of grotesque but passionate gossipers and pushed their potato-colored Soviet stories through a peculiar female masher that doles out equal doses of the pulsating and the macabre. “You can wake up,” one old woman says of nightmares, “but not always…”