There Once Lived a Mother Who Loved Her Children, Until They Moved Back In 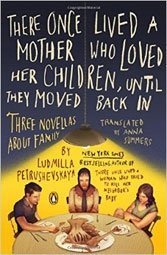 By Ludmilla Petrushevskaya, translated from the Russian by Anna Summers

In the stunning “The Time is Night” (1988), near-penniless Moscow poet Anna recites the details of her family’s disintegration, beginning with her custody of her daughter’s son Tima by a drunk, to the arrival of two more children by that same sexually reckless daughter — soon estranged — atop which are the comings and goings of an ex-con adult son with criminal inclinations who leeches on his mother while “resisting” her advice (“Just shut up, bitch.”) Then there’s Anna’s mother, who’s quite mad but now lives at home after cutbacks cost her an asylum room. Home is where the heart is? Yes and no (“…This life of ours? Darkness and cold, denials and death.”) Home is a place for the corrupt and the insane, for the greedy also, but a mother’s duty remains unwavering: to adore her children, and her grandchild. “Mothers — a sacred word, yet…” Emphasis on the “yet.”

There there’s Lelia in the five-part “Chocolates With Liqueur” (1992). A nurse, she married the madman who raped her and is now poising her family, this while taking up with another women and abetting his sister and mother as they scheme gangland-style to get control Lelia’s apartment (“For my own apartment, I’ll strangle anyone,” says sis). The horror comes in unsparing waves. Survival is the only joy, a dubious one at that. “She was calm, with the serenity of someone who has hit bottom,” and for Lelia bottom is a pool of blood.

Finally, tender in comparison, comes “Among Friends” (2002), a tale of Moscow wife swamping, envy and revenge, devious despair, all this among Vodka-depleted “so-called friends” that include passive informers and glass-eyed damsels who behave like they lost their virginity at birth. Friendship is of course another word for irony: “Suddenly all the knots became untied.” No surprise there.

Petrushevskaya’s work was suppressed under communism, and it’s no wonder. She eviscerates a broken system by focusing on the squalor of family members willing to do literally anything to ensure they have a registered roof over their heads. Once housed, family ties turn into mutating scar, with people piled atop each other as in a mass grave, but alive, often saved — if only reprieved — by their own deviousness. But humanity exists within the crevices of this squalor, which makes hatred an act perpetrated by those who can also know love — perhaps the most chilling deed of all.