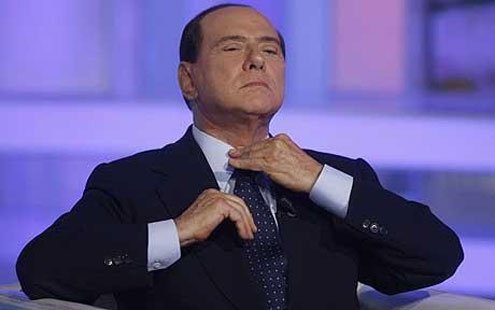 ith even longtime friends such as Italian newspaper Il Foglio suggesting it is time for Silvio Berlusconi to leave the banquet table, Italy may finally break off its 15-year co-dependent relationship with a narcissistic partner.

Instead of focusing on the jockeying among the motley crew of Berlusconi successors, Italians would do better to study some popular books on narcissism. Authors such as Sandy Hotchkiss (“Why is it Always About You? The Seven Deadly Sins of Narcissism”) and Eleanor Payson (“The Wizard of Oz and Other Narcissists”) will tell you that ending a destructive relationship is a good thing, but not enough by itself. If you don’t fully understand what you’ve ended, you may well end up repeating the pattern.

There are identifiable traits that make certain people vulnerable to narcissists and several of them are constants in the history, social organization and politics of Italy. Not facing these puts the country at risk of more Berlusconi or something similar.

Commonly seen as self-love, true narcissism, and traits such as Berlusconi’s — grandiosity, detachment from reality, pursuit of status, sex and power — are actually expressions of a weak or flawed sense of self. To compensate, the narcissist obsessively seeks positive confirmation of his own value from others. The larger-than-life personality created to overcome this attracts needy partners wanting to bask in the narcissist’s bright light. The result is a symbiotic relationship of complementary needs; Berlusconi and the Italian electorate need each other.

Although we all have some (healthy) narcissistic traits putting us at risk for dangerous narcissistic relationships, certain qualities increase vulnerability. Several are deeply engrained in Italy’s psyche: a weak sense of self or identity, magical thinking or previous relationships with unequal reciprocity.

Italy’s young national identity, dating from unification in 1860, is weak and flawed. It is based on nostalgia for a remote past — ancient Rome and the Renaissance. Complicating matters is the strong national identity associated with fascism, a still-unresolved stain on Italy’s collective unconscious.

Insecure about the country’s image, Italian media constantly puts foreign perspectives on the front page, inevitably accompanied by editorial hand-wringing about “what they think of us.” Coverage of Berlusconi’s latest sexual misadventure focused on “bad impression” (brutta figura) ahead of abuse of power or alleged prostitution.

It hardly helps such an unstable identity that the strongest Italian political party after Berlusconi’s People of Freedom (and a potential heir to power) is the separatist Northern League.

As for magical thinking, Italy suffers from the widespread delusion that strong outside or authoritarian intervention is what effects political or social change, not the sum of responsible individual choices. Italians struggle to understand that clean or orderly streets come from citizens who respect traffic laws and dispose of litter, not from stricter policing or more efficient trash collection.

Politically and historically, this faith in authority explains the conviction that fascism was forgivable based on making “the trains run on time.” More recently, Italians looked at 1992 as a magic year: From then on, Brussels authorities and the single European market would whip them into shape.

Berlusconi himself was greeted as a hoped-for savior in 1994 when he entered the government. Many believed his business background, strong character and charisma were the magic bullets that would clean up Italy’s corrupt politics after the 1990s Tangentopoli bribery scandals.

On the social level, magical thinking, exacerbated by institutional failure, substitutes for academic achievement or hard work. Getting ahead means snagging a winning ticket in the lottery of Italian life; a job in TV or a well-placed friend or relative whose “raccomandazione” will set you up in a lifetime job.

Magical thinking and relying on others to solve your problems breeds the unequal reciprocal relationships that are an Italian norm. You the lord, promote, hire and protect me, the vassal, in exchange for life-long submission. Italians call big Italian players “barons,” especially in the huge state-run sectors of healthcare, academia and business, such as Alitalia. Even Italy’s grown-up, stay-at-home children reflect a tendency to sacrifice autonomy for comfort and protection.

The world over, narcissism pervades media and a celebrity-obsessed culture. But the unhealthy blurring of boundaries among reality, theater and public life is more obtrusive in Italy than anywhere else. And no one is more responsible for this than Berlusconi himself. Long before “Big Brother,” a 1980s show on a Berlusconi-owned TV station had real-life housewives doing strip teases.

That led Italy into the unhealthy relationship in which it now finds itself. But how can it avoid another?

As any self-help book advises, the patient must take responsibility for itself. In Italy’s case, this means both institutionally and individually.

In the interests of a positive national identity, the Northern League might tone down the anti-south rhetoric. Eliminating national labor contracts might integrate the south better and wean it off enabling subsidies (more co-dependence). Changing the electoral system might make politicians accountable. Today, voters must vote for lists of candidates pre-selected by parties rather than individuals. A less patronage-prone system might have thrown Berlusconi out years ago, when he failed campaign promises to create jobs and build infrastructure. Reforming the schools and job market to reward merit and effort, not personal connections, might discourage magical thinking.

Individually though, Italians must stop running red lights and start throwing litter in bins. They must take daily small actions that add up to a civil society.

Sure, it’s hard work and no one can do it for them. But it will benefit all Italians. And they can start right now — even before Berlusconi leaves the table.