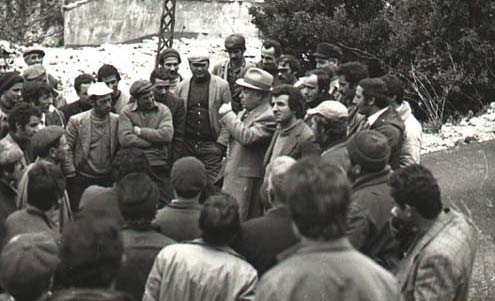 Italy was healthy enough to strike in the 1980s.
I

n 1975, brother might spare you a dime. Badger him for the quarter it cost to buy a daily newspaper and you hit a wall. Hard times. America’s cash-starved afternoon dailies closed in droves. Thousands lost their jobs. Recrimination took aim at TV — and CNN was still five years away.

In Rome, hardly the center of the world, my freelancing prospects sank. Cold-call letters to North American news organizations, 700 of them, yielded 12 responses. A few praised my spunk, a few more apologized. The nice ones even said, “Good luck.” No one offered much hope.

Every recession is personal. Woe is the gift that keeps on giving. It’s also the gossipy dialect of lean times.

Between 1973 and 1982, my twenties in a nutshell, the United States suffered two major recessions. The reprimand’s lyrics may change but not its music.

Now, the topic is the Web’s routing of newspapers. Then, drink-wrinkled journalists shrank from computers. Or lashed out. When United Press International’s Rome bureau installed so-called VDT’s, or “visual display terminals,” in 1979, a fellow staffer and British veteran vowed revolt. “We’ll get through this,” he reassured me uselessly. “We” included his green Olivetti 65. It was a wasted plural. He and his machine were soon archived.

The slippery downturn that began with the 1973 OPEC oil embargo caught my generation pants down. The 1960s and 70s were generally prosperous despite deep social and political snarls. America’s postwar middle class boomed and Western Europe’s acquired a footing. Two buried nations, West Germany and Japan, clawed back to the top of the heap. Italy was well-off enough to go on strike relentlessly.

Seeking work in 1979 generated weird exaggeration. My letters read like pleas. My friends lived in tiny flats. I lived with my mother. The sky was falling.

When I finally landed a reporting job with the Washington Star in June 1980 (thanks mostly to friend and mentor Mary McGrory), my wages were low enough to limit luxury. Dining out didn’t happen, vacation travel was rare, impulse buying impossible. It was good work if you could get it, and if it lasted.

When the Time Magazine-owned Star folded a year later, the staff commissioned T-shirts that read: “Time ran out on the Star.” Maybe, but The Star was losing money, and red ink tastes rancid in the best of times.

The Star had assigned me to cover crime in two outlying Virginia counties, Prince William and Loudon. Its ramshackle towns and a rural citizenry considered Washington, D.C. an imperial province of a far-away land. There were trailer parks and PCP labs. These newly mall-mauled acres now host tens of thousands of young couples in countless suburban developments. Seen three decades later, the change is dizzying.

No doubt some of these new suburbanites struggle with mortgage payments. That said, middle class leveling has shielded most young Americans from the spectral 1930s. Though credit “income” has vanished, and with it modest affluence, deliverance from destitution endure. “Will work for food” signs are fewer. Financial life-rafts limit (but do not cancel) the hardship.

I began saving in my twenties. I got my first credit card at 31. I hid it in a drawer. It hinted that I could live beyond my means, a powerful seduction in a carnival of goods. I traveled around the world in 1983 carrying wads of cash. At least I saw the stash dwindle.

In Rome, credit cards were interlopers. ATM? Bancomat? Dream on. American Express cashed personal checks as a courtesy. Earning the equivalent of €500 a month was a luxury, assuming you even collected the cash.

My first intimation that all this had changed came in 1985, when a new newspaper called USA Today beckoned me to work in Washington. My salary would be $40,000, a sum so large I fell speechless, which led to its increase. The company would also pay my moving expenses from Rome. Stunned, I accepted. More credit cards rolled in.

The other day a friend called to tell me that after two decades USA Today would soon suspend all international operations. In the 1990s, it had bureaus in London, Paris and Hong Kong, with another set for Beijing. Together we lamented rites of change, which nostalgists do avidly.

The Rome journalist who steadfastly defended his Olivetti in 1979 also kept a list of frequently misspelled words (the offending letter capitalized) on an index card pasted to the battleship grey desk. He’d point at it from time to time, scowling at me, the list’s most systematic ignorer.

But that was then.