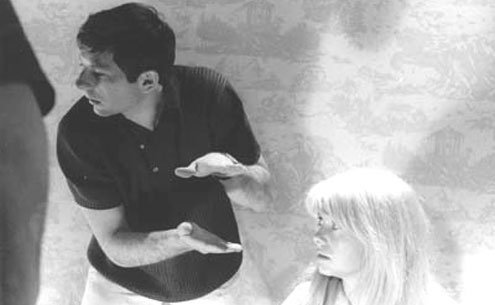 Polanksi with Catherine Deneuve in 1967.
A

nything but passing strange that the case of director Roman Polanski would remind me of my mother’s best friend Clelia. She was built like a bicycle spoke and for decades dedicated herself to one man, former Italian Prime Minister Giulio Andreotti, a Hobbit-shaped politician that most Italians under age 30 know only through their parents’ fuzzy memories and thanks to a recent Paolo Sorrentino movie called “Il Divo” in which Andreotti is portrayed as conjuror, con man, and crook.

Clelia didn’t believe in saints but Andreotti walked on water. “A master,” she said. “And you don’t know the half of it.” In many respects neither did she.

She worked as a journalist for the Christian Democratic Party newspaper Il Popolo, which had its headquarters at Piazza delle Cinque Lune, next door to Piazza Navona. She would dine with my mother a block away at a long-gone seafood place called “La Maiella,” a haunt for local party people and intellectuals who trickled in from the nearby senate and the chamber of deputies. I once overheard a quarrelling couple whose French banter grew intolerably loud. When I rose to hush them I saw Jean-Paul Sartre and Simone de Beauvoir arguing about fish. I retreated.

Clelia’s adamant Catholicism was as incomparable as her foul mouth. Hers was a vulgar, wine-fueled brogue. My shy mother was no match.

Though her marriage was childless, Clelia’s devotion to her husband — a Christian intellectual and politician — was near-mystical. She swore by him, just as she swore by Andreotti and the surreal hypocrisies to which the Christian Democrats hewed. They’d agree to just about any partnership that worked. Dubious morality had the confessional as a mitigating escape hatch. Democracy meant doing more good favors to good people than bad.

I spent a considerable about of time arguing with Clelia over divorce and abortion, which I supported in part because she deplored them. For Clelia, no circumstance dissolved a union. Transgression existed only to make way for forgiveness.

Correspondent Paul Hoffmann used three sharp words to described those times, the late 1970s: tawdry, flimsy and disordered. Good words. Rome was a place of “ambiguity, lies, self-deception, scenes and guilt feelings…” and Romans ready to resort to anything rather than make clear-cut decisions.

Clelia was an artful dodger, so for that matter was Andreotti and most Christian Democrats insiders. Even Polanski sipped from this elixir. In 1973, made a movie called “What?” in which a beautiful American starlet named Sydne Rome wanders around a southern Italian villa, naked, innocent and pawed upon. The film was later re-titled “Diary of Forbidden Dreams,” Alice-in-Wonderland style. Polanski even put himself in the movie, blurring the gap between winks and crimes.

In the early 1980s, when decadence spilled wholesale into mainstream politics, rumors began trickling out about her husband. I presumed they involved what was then the norm: Embezzlement or payoffs, skimming or turning a blind eye.

But this was different. Clelia’s middle-aged husband had fathered a baby with a 17-year-old girl. The girl’s maternity had been paid for and the child, once born, concealed in the husband’s hushed circle. He saw his young mistress on occasion and tended to the infant through discreet payments.

Clelia, the reporter, knew nothing — not at the time. It was only a few years later when her husband suffered a severe stroke that the rumors nested. She met her husband’s mistress and child at the hospital. He was 68 and dying; the young woman was 19. If shocked, hurt or simply mortified, she said nothing.

She did drink more. She visited her husband until his death, taking turns with his teen companion. She later befriended both mother and daughter, the children she’d never had.

When I told my American friends the story they retreated behind contempt. What an ugly husband, what an ugly story! Shameful and shameless.

Clelia by contrast rejected the temptations of judgment. She stoically transcended the event. She obliged resignation and carried on after his death, albeit wearily.

I once asked her how she defended the indefensible. There was nothing to defend, she replied. Human weakness in thought and deed inevitably violated most penal codes. At the same time, there was nothing appropriate about vindictiveness or retribution, new rage to repair old. Justice was unjust if it called for further breakage.

Nothing then. She insisted was larger than his defects, a great man. She swore by this until her own death. The holders of such Catholic positions are diminishing, with punishment and public-score settling more in line with societies that no longer have wars in which to exhaust retribution.

I don’t think Clelia would have excused Polanski. She would however have forgiven him. And we would have argued deep into the night.