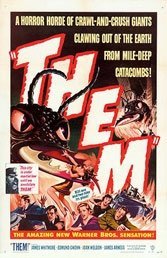 Pulp is only as good as your latest mutant… ant. As postwar Italian and French cinema slogged their way through depression and hard-luck realism, the Wonder Bread United States had happier other things on its mind, including the end of the world. Public frenzy focused on communism, UFOs and radioactive fallout. Images of the deformities caused by Hiroshima and Nagasaki blasts made the rounds. Mutation was the word. Meantime, A- and H-bomb tests lit up the American southwest.

Out of this came “Them,” a landmark sci-fi tale that doubled as a suspense thriller and between-the-lines political commentary. A New Mexico cop (James Whitmore) and his partner find a little girl wandering through the Alamogordo desert in catatonic shock. They discover her missing parents’ trailer ransacked and seemingly pried open. Incidentally, sugar is everywhere. More havoc-strewn scenes crop up, this time with corpses. The cops think they’re up against a crazed mass murderer.

They are, but only in a manner of speaking. Soon, the local FBI is called in (James Arness, later of “Gunsmoke” fame). Strange tracks are found. Scientists arrive. To confirm a theory, one of them gives the girl, who has yet to speak, a whiff of formic acid, produced by ants. “Them! Them! Them!” she screams.

The film’s search-and-destroy section is less compelling that its first and monster-less 50 minutes, hampered by the limited special effects of the day. But those limitations are also a strength. Terror is hinted at, teased out, spiced with strange sounds.

The darkly claustrophobic, survival-of-the-flamethrower-armed finale — an ant hive torched in a storm drain — presaged “Godzilla,” “Alien” and the sci-fi positioning of sudden monsters in small places. Every button is deftly pressed. So is nuclear wariness. Intones the lead scientist (the venerable Edmund Gwenn): “When Man entered the atomic age, he opened a door into a new world. What will he eventually find in that new world, nobody can predict.” A troubling B-movie with A+ implications.