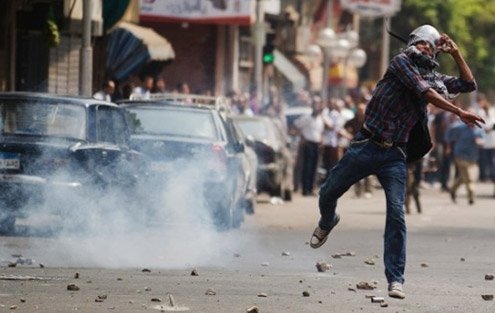 Egypt's escalating violence is in part the product of a long-held belief in conspiracies.
E

gypt’s deepening turmoil is based on intimations of conspiracy; a passionately unshakable southern Mediterranean way of thinking in which scheming puppet-masters are seen to preordain most social and political outcomes to suit their immediate whims. The sentiment typically portrays privileged elites (political, financial and religious, or all three) as aligned against dispossessed masses who are then left with two choices: resign themselves or rise up. In secular Italy, the phenomenon is known as dietrismo, a “man behind the curtains” oversimplication that suggests not a country but a conglomerate of castes and cabals — loro, or “them” — that capriciously lord over governance and money.

In secular but untamed Egypt, the “them” factor is these days complicated by the existence of the minority Coptic Christian community, which Islamists have long associated with greed and unworthiness in much the same way as bogeyman-seeking Europe once blamed Jews for banking banditry, with ultimately dire consequences.

Driving Egypt’s ongoing counter-revolt, which would ostensibly see President Mohamed Morsi returned to power, is an ill-defined but visceral anti-Coptic loathing that chooses to imagine the army’s ouster of Morsi as a kind of North African-style Masonic coup orchestrated if not directed by the country’s Coptic elite, the latest “them” in a richly conspiratorial landscape.

Morsi’s do-or-die backers, some sincere, many manipulated, embody grass roots resistance to what is perceived as a conspiracy that pits the idea of well-off local Christians, the Jews of the moment, against the Muslims who legitimately elected Morsi. This wheel-within-in-a-wheel further complicates Egypt’s many and layered woes. The national economy is in near-ruins, putting even food necessities at risk; the government, such as it is, rules through force; and repressed rage continues playing out daily.

But while Egypt’s first revolt used then-President Hosni Mubarak as a one-size-fits-all scapegoat, this second lurch is more primal, reflecting festering suspicions about who, or what, makes Egypt’s closed-door decisions (suspicions the Islamic Brotherhood is understandably stoking).

The Copts represent about 10 percent of the Egypt’s population and ran the country until westward bound Muslim made their Crusades Era landfall. For modern centuries, Egypt’s minority Christians and Arabs have coexisted in a manner similar to Lebanon, where Maronite Christians make up a quarter of the population. But before leaving, Lebanon’s colonial French handlers established ground rules: that the country’s president be a Christian, its prime minister a Sunni Muslim, and the house speaker a Shiite. The status quo held until the start of the 1975 Lebanese civil war, which lasted nearly two decades. Part of the reason the Palestinian Shiites of Hezbollah are now assisting Syria’s embattled Assad regime is that Syria once armed those same Shiites against Christians.

But the Copts never attained Maronite influence (nor sought it), instead keeping a lower profile and focusing on business success and social acceptance. Boutros Boutros Ghali, the former United Nations secretary-general, is a Copt, as is Mounir Fakhry Abdel Nour, the country’s new trade and industry minister. Copts Naguib Sawiris, a telecom mogul, and jack-of-all-trades Onsi Sawiris, whose family flourished under Mubarak, are billionaires. Segments of the Egyptian military are considered “Copt-friendly,” further stoking arcane conspiracies.

As anti-Mubarak resentment grew two years ago, so did attacks on Copts and their property, since both represented establishment ingredients. Churches were burned down. Gunmen disrupted festivities and Christian-owned businesses were ransacked.

Banned under Mubarak, Morsi’s winning Islamic Brotherhood did little to make amends. Now, its impressionable supporters —both young and feral — are framing his ouster in terms of yesteryear ingredients, producing a new level of violence that while billed as religiously motivated (Muslim vs. Christian) in fact has more in common with a militant version of Italy’s dietrismo. In Egypt’s case, the rich and successful (read Christian) are eager to strip the poor (read Muslim) of what little they have left. Supporters portray the deposed Morsi as a victim of an unbowed Mubarak-era elite (all the more reason to recognize Mubarak’s 2011 toppling not as a revolution but as a course adjustment whose compass points remain unclear).

The Coptic factor and the military’s inability put the Islamic Brotherhood genie back in the bottle, a process it mistakenly underestimated, underscores the dangers of having an alienated and suspicious citizenry that finds more solace in hatred than in trust, some convinced that cabals are at the root of their woes.

A Morsi restoration is unlikely. He was and remains a divisive and troubling figure. His return would represent an irrevocable loss of face for a rigorously secular military and intelligence service that so far has not only resisted internecine chaos but seemingly declared all-out war on would-be pretenders. Backward steps would also deal the country’s precarious economic situation a further setback, since some Copts are key financial players.

Yet Egypt’s situation is dire and is likely to remain that way indefinitely. Civil war-style turmoil can become its own carnival — witness Syria’s sprial — with clashes feeding on a hateful but righteous thrall that eventually yields even wider conspiracy theories.

For now, all that’s missing is an emperor and a fiddle.