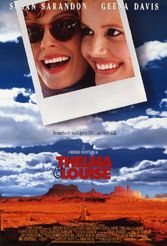 Ridley Scott’s girl-buddy flick occasionally errs on the wrong side of feminist satire but is always a feast. Fast-food waitress Louise (Susan Sarandon) and unhappily-married Thelma (Geena Davis) bolt small-town Arkansas in a ’66 Thunderbird for a weekend joyride. Things go sour when Thelma’s assaulted in a bar parking lot and Louise guns the guy down. Suddenly, the ladies are Bonnie and Bonnie (unless you briefly count in Brad Pitt, whose sexy cameo as J.D. quickly put him on the Hunk Map).

Callie Khouri’s script cleverly gets female friendship to coexist in the framework of an action movie, with Sarandon and Davis stealing the show. They’re the movie’s static charge. Harvey Keitel, their cop pursuer, does well as an out-of-character sensitive type. Blame Scott for finding a too-neat way of tying up all the loose ends. If, as Janis Joplin sang, freedom’s just another word for nothing else to lose, crash-and-burn is no solution.