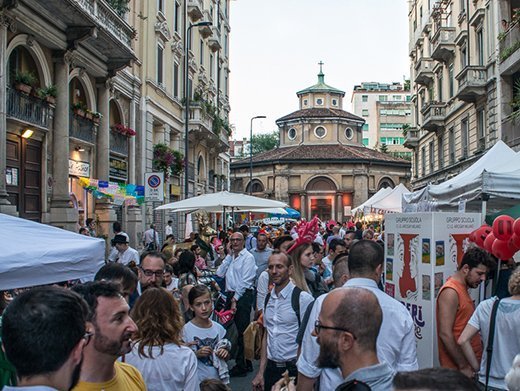 Milan's Via Lecco provides a sense of community.
I

t’s Saturday evening and I’m hanging out with my English speaking “Meet Up “group on Milan’s Via Lecco. By midnight, the city’s so-called “Gay Street,” packed as always even though it’s well below freezing. My friends, who come from at least a dozen countries, don’t seem to care about the cold.

Gary is very drunk and sharing kisses with everyone. Anthony is moving in on Gary like an octopus toward its prey. Mathew is recounting stories about his hardships growing up in Texas. Antonio is telling me that his adopted parents won’t accept that he’s gay and that his father keeps asking him why he doesn’t have a crucifix over his bed. Fabrizio is complaining about bottom shaming to Samuel, who is proclaiming that he is a “masculine top” in a way that suggests internalized homophobia. Manson, who has just come from Munich, is commenting on the open and friendly atmosphere.

Gavin is worried about returning to China if he can’t find a job now that he has graduated from design school.

As I watch my friends gossiping, laughing, joking and embracing one another, I think of the Yellow Brick Road from “The Wizard of Oz.” Dorothy and her small dog Toto find themselves in the company of the Scarecrow, the Cowardly Lion and the Tin Man. Together they skip along, arm and arm, on their way to find the Wizard, the source of truth and knowledge, with Dorothy hoping to find a way home to Kansas.

By midnight, Milan’s so-called “Gay Street,” is packed and lively. Every city needs such a street, where its gay community can feel at home and safe.

Along the way, the Scarecrow discovers he is able to think, the Cowardly Lion finds his courage and the Tin Man learns he is capable of love.

For many in Milan, Via Lecco is the Yellow Brick Road. It’s a short street centrally located, just off the city’s main shopping boulevard, Corso Buenos Aries, in the Porta Venezia neighborhood and just behind the Arcobello, or “Rainbow,” cinema (not directly associated with the LGBTI+ rainbow movement). All along the street are small gay bars, or at least gay-friendly bars. Most weekday evenings, and even more on weekends, the entrances to these places are filled with people busy socializing, drinking and smoking. The street scene can be livelier than the bars themselves. In Rome, Via di San Giovanni, virtually at the foot of the coliseum, has a similar quality. Unlike what you might imagine in a North American context, there is no loud music or cars cruising up and down. Disorderly drunks are rare.

Both these streets are a haven for a large number of people from across the LGBTI+ spectrum, including the usual trendy hetro chicks with their ‘straight’ boyfriends in tow.

Someone once said that gay people are the most powerful and effective urban revitalization force on the planet. In the 1970s, Via Lecco was considered so dangerous that public health doctors visiting patients in the neighborhood had to give police an “all clear” call within minutes of entering a sick person’s apartment. If no call came, the police moved in.

While the neighborhood has maintained its predominately African flavor, it’s now undergoing something of a transformation. Trendy African and Indian restaurants have sprung up, many not necessarily gay. Once daunting, it’s now fairly relaxed.

Until the early 2000s, Via Sammartini, behind the central train station, was considered Milan’s ‘Gay Street.’ But center-right Mayor Letizia Moratti (2006-11) put an end to that, getting police to close discs and shut down gay businesses. Typically, she used the public nuisance excuse. Residents had complained, she said. This was odd since the street’s closeness to railway lines made noise inevitable.

The street was closed off for refurbishing, and by the time it reopened in 2015, most of the gay crowd had moved on to Via Lecco and focused on “Mono,” a small gay owned and operated bar. In 2016, a coalition of municipal politicians turned back the clock, once again using police to intimidate gay pub owners and their patrons. They conduct random checks to see if the places complied with city codes, also asking patrons for identity cards. Fortunately, the police reportedly behaved well, and fairly. They told the politicians they’d found no serious violations — aside from bars letting customers take their glasses outside, when the rule states plastic cups only.

After that, the political hate-mongers backed down. Now, the Milano Pride march in late June begins at the Central Station and ends up at Porta Venezia. Via Lecco is closed off (for the right reasons) and filled with revelers, performers and kiosks that attract scores of locals and tourists to the city center.

It may not make sense to a straight person, but The Yellow Brick Road represents the street that we as LGBTI+ people hold dear. Whether it’s called Christopher Street in New York City, Castro Street in San Francisco, Church Street in Toronto, or Canal Street in Manchester, every community needs a meeting point.

Wherever my group of friends ends up in life, I suspect they will remember Via Lecco as their street “over the rainbow,” where they could feel safe, share intimate experiences with the likeminded, and find the courage to live their lives as authentically as they are able. Possibly, they can also learn to love themselves and to make loving room for someone else in their lives.