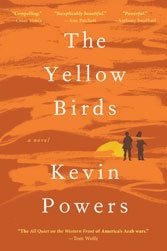 Powers’ bloodying dervish of a debut is less a novel per se than a sustained poetic whisper about war and its timeless scarring. At times searingly beautiful, at others self-consciously overwritten, always fiercely observant, it is a detritus-filled reflection on the war in Iraq and one man’s deteriorating condition within it. That man is 21-year-old private John Bartle, “Bart,” a rural Virginia boy, whose self-anointed task is to testify about the fate of his comrade, fellow private Daniel Murphy, “Murph,” an 18-year-old from Blue Ridge coal mining country, and that of Sterling, their numb and barely older sergeant. He sketches the three young men as if the ghosts of Confederate soldiers let loose in a place where “a group of boys can become a calculus for what will go ungrieved…”

Shifting by chapter between memories of fighting in a northern Iraqi city called Al Tafar and Bartle’s self-imposed postwar Virginia solitude (both informal and coerced), Powers pans for the essence of war’s hell and, through brute force of words and conscience, serves up an existential diary that treats “hero” warriors like so much gruel, people served up to be eaten alive, inexcusable, unredeemed, made as horrible as their surroundings and often amazed beyond their own amazement: “How can metal be so on fire?”

“Our little pest of a war” — Iraq — cauterizes and dulls, sharpens and confuses. “The only equality that lasts,” observes the spectral Bart, the conscientious book’s one-man chorus, “is the fact that everything falls away from everything else.” Nor can home — “the land of the free, of reality television, outlet malls and deep veined thrombosis…” — repair the damage done.

Soldiers, naïve and decent enough to start, are transformed by Homeric tearing into zombies who respond by rote, conscience neutered into aloofness, “because there isn’t any making up for killing women or even watching women be killed,” or recourse to sentiment when the bodies of men and dogs are booby-trapped.

“This book was written primarily alone,” the Richmond-born Powers, who served as a machine gunner in Iraq, explains in his acknowledgements. Rarely is it any other way with fiction by those who’ve survived a first-hand sampling of war’s sounds and smells. The fatalistic Powers is on a mission to hurt with words, deftly turning shock and awe against itself to gnaw away at what’s left of haunted Bart, a survivor who, to borrow from Vietnam sage Tim O’Brien, can’t “encyst and destroy the reality of death itself.” Bart is unable to enjoy not being dead, which in the oddest of ways makes him poetically more vivid — a traumatized member of war’s walking dead — but ultimately less credible as a nuts and bolts soldier.