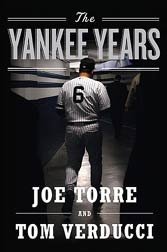 By Joe Torre and Tome Verducci

American sports books are peculiar in the way they stake out a sentimental ethos. Since baseball is the quintessential American game, the official past-time (despite the inexorable ascendance of pro football), this “can-do” approach, with its ever-present moral trials and tribulations, is the fulcrum of all sports narrative.

Verducci, a former Sports Illustrated writer, is a fortunate man. His book — a montage of magnificent quotes and stirring connective narrative — has as its subject the manager of the most well-known American sports franchise of all time, the New York Yankees. One player calls them a “traveling rock show,” and he’s not far off. In essence the book chronicles the rise and fall of the team’s manager, Joe Torre, from 1995, the year of his hiring, to 2007, when he quit under pressure. In the meantime he won four World Series titles and helped the Yankees become the richest and most successful team on earth — notwithstanding the exasperating, berating, rarely cheering presence of principle owner George Steinbrenner, “The Boss.”

This is not a ghostwritten autobiography. It’s a hybrid biography-confessional that uses Torre as an insider conduit to trace Yankees, and baseball, history. It deftly explains how a word-of-mouth culture of steroids spread through the game (“what had been a rogue, underground, fringe culture of steroid use and performance-enhancing drug use …. had become an all-out pharmaceutical war by 1998”) assisted by corporate greed and insider omerta. It studies how a sport that was once dominated by wizened insiders — grizzly ex-player knights — gradually became the province of computer-wise thirty-something analysts who crunched numbers and examined data. In that sense, following the rise and fall of Torre is a morality tale about the end of one kind of innocence, and of loyalty. It’s also about a culture of grown-up adolescents, in this case baseball players (but it could as easily be soccer), so wealthy, some of them, that their detachment from real world rigors is near total.

Verducci is at his best in chronicling the rivalry between the Yankees and the Boston Red Sox, “baseball’s Peloponnesian War,” he elegantly calls it. He’s also spectacular in making vivid the gladiatorial side of high-stakes athletic enterprise. Of now steroid-disgraced pitcher Roger Clemens, who required a hot liniment massage before pitching, this passage: “[Trainer Steve] Donahue would rub the hottest possible liniment on his testicles. ‘He’d start snorting like a bull,’ the trainer said. ‘That’s when he was ready to pitch.'”

But Americana needs a Heartbreak Hotel, and its rooms are plentiful. There’s Kevin Brown, a once-gifted but fading pitcher, “the broken-down lone wolf,” who is immature, sensitive and prone to rage. After an awful game, Torre seeks out Brown expecting to an angry man but finds a pitiable invalid instead: “Kevin Brown, 40 years old, a six-time All Star … a man who has earned $130 million playing baseball, was curled up on the floor in a tiny crevice in the corner of a storage area in the back of the clubhouse.” Later, Torre tries finding another highly-paid but inconsistent pitcher, Kyle Farnsworth, and discovers him “on the floor of in the corner of the tiny, run-down trainers’ room in the visiting clubhouse, crying.” An insult had offended him.

In the end, Verducci thanks Torre, who now manages in Los Angeles, for his honesty and truthfulness, qualities that emerge time and again in what amounts to a portrait of skilled boys, some earnest, some vain, most needy, playing a child’s game for the amusement of millions while earning millions for themselves and their bosses in the presence of an inspirational baby-sitter, which may best define the role of 21st century coach.