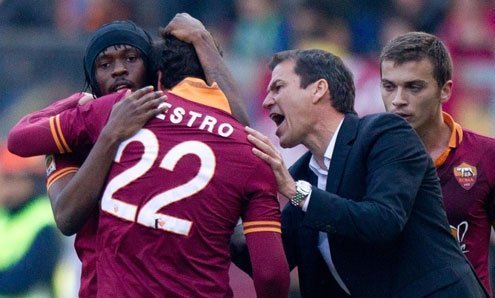 he 2013-14 campaign has been an astonishing one for AS Roma. After posting a seventh-placed and two sixth-placed finishes in the last three seasons, the club has secured second spot in Serie A and automatic qualification for the Champions League group stage.

Even more remarkable, however, is that Roma has already broken its record points total, set under Luciano Spalletti in 2008 when the club was challenging Inter Milan for the title.

That year they finished with 82 points, falling three points short of the title on the final day. A comfortable 2-0 victory over AC Milan saw manager Rudi Garcia’s men reach 85 points by the end of April, with three games left to play.

But a fourth national title has been all but thwarted by a machine-like Juventus team. By winning 3-1 at Sassuolo, Juventus was on the brink of wrapping up its third league title in as many years. It has won 30 of its 35 matches this year.

The Turin club was always going to be a force to be reckoned with, particularly after adding two proven goal scorers in Carlos Tevez and Fernando Llorente to an already imperious midfield and defense.

The pair has combined to score 34 goals and added a directness the team’s front line had lacked in previous seasons under manager Antonio Conte.

Roma also made some fine off-season acquisitions. This year’s defensive unit, bolstered by the arrivals of Mehdi Benatia at center-back, Morgan De Sanctis in goal, and the tenacious Kevin Strootman (injured in March) and Radja Nainggolan in defensive midfield, has seen Roma keep 21 clean sheets.

Meanwhile, Gervinho’s pace and hunger to latch onto forward passes and run in behind opposition defenders has been instrumental to the team’s attacking maneuvers. Over all, the often static build-up play that had marred previous campaigns has been replaced by a swifter attack.

By and large, Roma has been able to find a deadly balance between defending well and scoring almost at will — its goal difference of +52 (equal to that of Juventus) is testament to this.

Destro’s return to action at the end of November added some much-needed impetus and goals (13 so far) to a team whose campaign threatened to stagnate after an historic run of 10 wins from as many matches at the start of the season.

Nonetheless, fans will continue to ask themselves what might have been. Would Roma lag behind Juventus had Garcia been able to field a full-strength side in disappointing fixtures against Torino, Sassuolo, Cagliari and Atalanta.

Things also might have gone differently had someone like attacking midfielder Erik Lamela still been among Roma’s ranks. The Argentine formed a fruitful 32-goal partnership with Pablo Daniel Osvaldo last season before leaving for Tottenham Hotspur in the summer.

His replacement, Serbian Adem Ljajić, has struggled to make the desired impact in his first season at the Stadio Olimpico. The absence of so many forwards placed the onus on Ljajic to deliver. His inability to find the net played its part in the eight points dropped against counter-attacking opponents — a familiar shortcoming that fans hoped had been eradicated after the opening 10 victories.

The club’s current points haul would normally be sufficient to claim any league title across Europe and Garcia deserves an enormous amount of credit for transforming Roma’s fortunes in such a short period of time.

The Frenchman, allegedly Roma’s third choice manager after Manuel Pellegrini (Manchester City) and Laurent Blanc (Paris Saint-Germain), got the new signings to gel quickly. He also won over and maintained the respect of well-established players like Totti and Daniele De Rossi. He even brought out the best in peripheral squad player Rodrigo Taddei, the source of much (sometimes unwarranted) ridicule in recent years.

“It has been an extraordinary season, but we can still make it an exceptional one,” said Garcia after watching his team win against Fiorentina in late April. “Anything that comes now is a bonus.”

Fans disheartened that Roma’s points haul won’t be enough to win an elusive and highly sought-after scudetto need to remember that this year’s objective was to end a three-year absence from the Champions League, which the club has achieved with style and time to spare.

Fans should focus instead on how this much-improved team can fare against Europe’s elite. On the basis of this campaign, nobody should be taking them too lightly.

— Editor’s note: Juventus won its third consecutive Serie A title when Rome lost to Catania on May 4.