The women of Savages 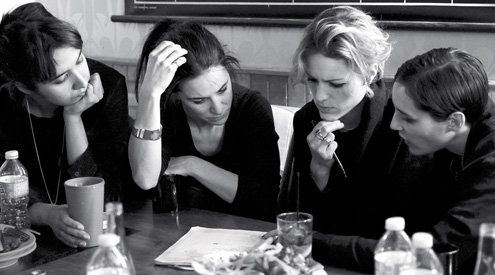 n a period marred by negative musical news — the death of David Bowie atop the list — it’s heartening to see January end with the sophomore release of London’s Savages, a band that has never shied away from showcasing its vitality. In Adore Life (Matador), listeners are treated to a sonic rush that has never felt more natural to the four-woman band.

There is much to unpack in the run-up to this record. Formed in late 2011, Savages was already opening up for British Sea Power in early 2012 and released the lauded “Husbands” single later that year. Soon, discussion of the band shifted to matters of style — their all-black outfits, their politics, their confrontational live shows. Savages had a carefully managed, holistic appeal that post-punk fans new and old felt had been missing.

Silence Yourself, their 2013 debut album, was highly regarded. I found it flat. Despite a few choice singles, the record felt like listening to a simulacrum of Siouxsie and the Banshees or Joy Division or The Glee Club or even later revivalists like Scanners and Ex-Lion Tamer. It was a slog, in short, but cruised to year-end polls on the strength of the band’s image-driven reputation.

Adore Life does not alter that manner of working — this is still dyed-in-the-wool post-punk gloom. But it’s clear that they’re working better together. The loops of ideas that never quite panned out on Silence Yourself are closed this time around. The two fistfuls of tracks don’t just sound like incomplete sketches or half-baked attempts at songwriting. The variety is wider to great effect.

Fans will not be surprised to discover that the rhythm section of Ayse Hassan on bass and Fay Milton behind the drums remains the band’s strongest asset, a foundation on which singer Jhenny Beth and guitarist Gemma Thompson can construct and deconstruct melodies and countermelodies at whim. Pick any given song on Adore Life (or elsewhere, really) and it’s likely you’ll notice Hassan and Thompson first.

What’s changed is that Beth and Thompson have sharpened their knives. Though Beth’s lyrics are still vague pontifications and morbid extremisms regarding the many facets of love, she nevertheless sounds more nuanced in her delivery of lines like “If you don’t love me, don’t love anybody” (which opens the album on “The Answer”) and “I adore life / D’you adore life?” (repeated toward the end of slow jam “Adore”). The lyrics may make for painful reading but at least Beth is showing new range. Her variety allows the rest of the band to loosen up in stretches (the contemplative “Mechanics” is a good example.)

Thompson also appears to have better thought through her guitar parts. Her previous reliance on aggression alone has been tempered to add anchoring loops to her feedback scrawls and drones. The dirty riff opening “The Answer” is a good example: Thompson doesn’t waver from it until the final 15 or so seconds. “Sad Person” also makes its melody clear from the off, but Thompson lets the notes drift for several seconds through a verse. It sounds cool and, more importantly, controlled. The song never gets away from her.

Though they remain carefully managed visually and their sound hasn’t changed, the women of Savages have noticeably improved upon their debut. Within the strict confines of post-punk’s macabre aesthetic, they’ve delivered an album that sounds as good listening to it as it does thinking about it. This is what you get when you slightly mess with love.