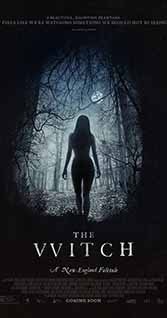 Writer-director Robert Eggars cuts to the quick of early 17th-century Puritan North American witch phobia by honing in on a deeply Christian family of English émigrés who leave a close-knit settlement after a dispute over scripture, making homestead on the fringes of deep and dark New England forest. There, bearded father Will (a pitch perfect Ralph Ineson) intends to provide for his wife, four children and infant son Samuel. Until that very son disappears into the loud thrall of the pulsating woods while under the care of young teen daughter Thomasin (Anya Taylor-Joy).

From the moment of their encampment, Eggars opens the story into a surrealist abyss that successfully combines Christian fear of the supernatural with the coming of age of newly menstruating Thomasin and younger brother Caleb (Harvey Scrimshaw), also feeling the sexual pull of early male pubescence. These two remarkable characters create a bridge between the blood-sucking terrors of forest (shot in natural light) and the anthropomorphic fears generated by suspiciously attentive animals — there’s a black hare that dwells on the cusp of the forest and a goat named Black Philip, each one a Satanic incarnation in waiting.

Will prays, mother Katherine (Kate Dickie) worries hysterically, twins Jonas and Mercy begin hearing voices, and the increasingly unnerved Caleb pushes deep into the woods until he finds himself front and center with an orgiastic entity, emerging damaged, entranced and far from innocent.

Yet it is Thomasin, the least susceptible, the virginal woman-in-waiting, who is most suspected of witchcraft — thus becoming the loop through which the story’s simmering paranoia is threaded, until Thomasin’s temptation affords a beautifully sinister climax, no Jesus in sight.