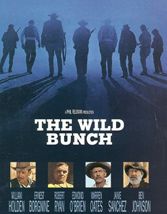 A Vietnam-era post-Western Western that sneers at John Wayne and wounds that don’t bleed.

Sam Pecknipah sends a tremor into the Western’s vaulted ceiling by focusing on decent if outdated outlaws. Pike is an antique, and knows it. He’s tired of the violence but has no idea of what to make of life in its absence. No one’s particularly sentimental because the emotion is unfamiliar. Violence is the norm.

At the same time, the rules of engagement are changing. And that’s what’s fascinating — to watch outlaws thrashing in their own twilight, archetypes ruing the end of their romanced genre. Says Pike (Holden feels old): “We’re gonna stick together, just like it used to be. When you side with a man, you stay with him. And if you can’t do that, you’re like some animal, you’re finished. We’re finished. All of us.” And then they are. A director’s cut was issued in 1995.