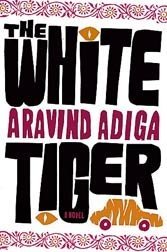 All right, try to ignore the hyperbolic back-cover bumph praising the super extraodinariness, incredible uniqueness and brilliant eloquence of this book. Hastily skim the comparisons of this thirty-something, first-time author to everyone from Dostoyevsky to Richard Wright. Thumb past the eight pages of over-the-top shout-outs from English-language papers the world over. Try to block out your awareness that the Indian-born novelist took home the British Man Booker award for fiction in 2008. Just read and see what you think. (Not a bad first novel… a mildly compelling plot involving Balram, a poor boy in India who moves up in a venal and violent world through corruption and violence… some funny passages and observations, though the premise of Balram telling his life story through letters to Chinese leader Wen Jiabao is clunky and unnecessary and the motivation of the character is never really clear… A light read, quickly forgotten.)

Once done, remind yourself that it’s not the author’s fault such oversized acclaim and attention have come to focus on him. Praise, like prizes, is subjective and often arbitrary. He was, before he managed to find a publisher for this debut novel, just another struggling writing. Wish him the best for his next book, which you hope will be better.