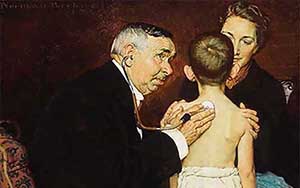 In the era of house calls, white coats were absent, until, that is, you got to the hospital.
A

t my white coat ceremony almost three years ago, a physician gave a brief speech about this new attire we were about to don. I don’t remember his name, but I do remember, with stunning clarity, his simple premise:

When you start medical school and put on your white coat, he told us, it will seem like a costume. But eventually, as you embrace your new profession, you will come to see it as a uniform.

I’ve thought about this concept throughout medical school, tested its truth as year 1 became year 2, and then year 3. As I approach the start of year 4, I conclude the speaker was right. The first time I put on my white coat, it felt completely foreign. The first time I wore it in the hospital, to spend an afternoon observing in the burn unit, I was shocked at how my white coat and hospital ID acted as an all-access pass. With them, no one questioned my presence, even in “restricted” areas. No one, that is, except for me.

I don’t recall the precise turning point when the white coat finally felt comfortable. What I do recall is that at the start of my psychiatry clerkship, a rotation in which you don’t generally wear your white coat, I initially felt confused, almost naked, as I went about my medical student duties in the hospital. Then I knew with certainty that I had accepted the white coat as a uniform, and not a costume. It had become a part of my identity.

It was with all this in mind that I selected a date for my Step 2 Clinical Skills (CS) board exam recently.

I took my first board exam, Step 1, the February of my second year of medical school. We have to take two more board exams during our fourth year, prior to graduating. Step 2 Clinical Knowledge (CK) is a daylong multiple-choice test. Step 2 CS is a daylong series of 12 encounters with standardized patients (actors). Each encounter lasts 25 minutes. You have 15 minutes to conduct a focused history and physical exam based on the patient’s chief complaint (known as the presenting problem). You then have 10 minutes to write up your findings, top potential diagnoses, and the diagnostic tests you would order next. You are graded on a number of things, including your interviewing skills, physical exam skills, and diagnostic reasoning. The exam is pass-fail. I have to pass to get into residency — but no pressure, right?

The author in her white coat: an all-access, no one questioned pass, but no free ride.

Step 2 CS is only offered at a handful of sites throughout the country, the closest to New York City, where I live, being in Philadelphia. So it’s a bit of an ordeal. You have to take the train or bus the night before and stay in a hotel. And you need to plan for a week or two of studying first — this is not a test to go into blind or unprepared. It’s an expensive ordeal, too — $1,285 to be precise. Aside from the terrible effects a “fail” would have on your residency application, you don’t want to shell out that application fee a second time. So, you choose your date carefully.

Based on my fourth-year schedule, I had planned to take the exam in late October or early November. Sitting at my laptop, looking at the dates available, I had to make a choice. But how do you decide between a day earlier and a day later? Was there a strategy to this? There must be. I groaned (audibly, I imagine), with the weight of this decision, and the frustration of indecision.

I looked at the available dates again, more closely this time. As I did so, that speech from my white coat ceremony came back to me.

It was perfect. Poetic.

I smiled as I clicked on “October 31” as the date to take my exam, and completed my registration. I had no doubt that this was the right day. Suddenly, I had transformed a day that had so far filled me with dread into one filled with meaning.

Changing my attitude in this way won’t erase the anxiety surrounding this exam. But it will ease that anxiety. And I believe approaching the exam with this positive perspective will lift not only my spirits, but my confidence too, because what started as a costume has in fact become a uniform. And I have both been given the privilege, and earned the right, to wear it.