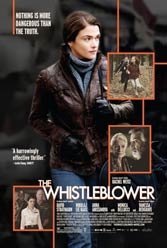 Give guns for hire the benefit of a uniform and bad things happen. Hitler’s Brown Shirts and Mussolini’s Black Shirts were little more than natty thugs, Balkan militias their heirs. Which brings us to blue-dressed UN peacekeepers. Noble, you say. Not quite.

This fact-based thriller puts blue in league with brown and black, loosely tracking the story of divorced mother and Midwest cop Kathryn Bolkovac (Rachel Weisz), hired in 1999 by a security firm to work as a U.N. International Police Task Force monitor in postwar Bosnia. Once there, she stumbles onto a human trafficking ring that moves enslaved teens from eastern states into makeshift Bosnian brothels. Not only are the girls’ sexual services peddled to UN peacekeepers, but also those same officials help with their transit. Trying to dig deeper, Bolkovac is ostracized, stonewalled, and misdirected. Neither the UN nor the U.S. State Department has much interest in seeing its blue-boys portrayed as amoral sexual predators. Worse still, Bosnia doesn’t prosecute domestic violence and outside enforcers enjoy immunity.

Coverup-busters almost invariably deal from a stacked deck; the bad are very, very bad; the sensitive (in this case UN officials played by Vanessa Redgrave and David Strathairn) are knights. Volkovic’s quest is closed out by a text crawl reminding viewers that security contractors all but run parts of the troubled world and that human trafficking and sexual slavery are flourishing businesses.

Credit Canadian director Larysa Kondracki’s hard-hitting debut with a no-nonsense approach that helps makes an awful story into gripping entertainment. But as fine an actress as Weisz is, she’s not entirely plausible as a Lincoln, Nebraska cop, and the venerable Redgrave is limited to hushed platitudes.

The real life Bolkovac won a wrongful dismissal suit against U.S. State Department sub-contractor DynCorp Technical Services, the case that brought her trafficking allegations to light. Though some of the contractors were fired, none were ever prosecuted.