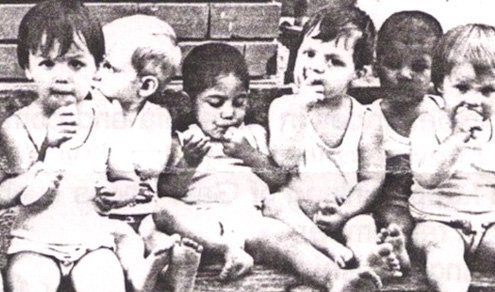 Abandoned to be reclaimed — maybe.
I

n 19th century Milan, wealthy families were building the splendid palaces tourists admire today. However, the archives of the Provincial Institute for Child Aid and Protection, IPPAI, record a darker history. In 1790, Leopold II of Austria made it possible to abandon a baby and to reclaim it later without paying a “maintenance” fee. When the Italians took over from Austria in 1866, two thirds of all babies born had been abandoned to the foundling hospital of Santa Caterina a la Ruota.

Flores Reggiani, director of the archives, shows me 50 kilogram, leather-bound registers. Babies were abandoned anonymously in the registrar’s office, maternity ward or, during the night, in the ruota, wheel, also called torno, as in levati del torno, “get lost.” This was a rotating cylinder built into the hospital’s outer wall. It was made smaller in 1858 to keep out babies older than five months. When it turned, a bell called a Saint Vincent de Paul nun.

The typical mother was young, illiterate and poor. She may have been a laundress or seamstress; her husband, if she had one, a day laborer or assistant craftsman. Effective birth control didn’t exist, nor did safe artificial milk. Fertility rates were higher than now. Women gave birth to 12-to-15 children. After the first few they turned them over to the foundling hospital. About 20 percent were sick, deformed or even still-born, and were left in the torno to avoid burial costs.

Many parents intended to reclaim their children if times improved. To help them, the hospital kept meticulous records. Around the baby’s neck they tied a cord sealed with lead and bearing a lead medal, with a cross in front and the year and the baby’s entry number in back.

Flores shows me register pages recording payments to wet nurses, items found with the baby — diaper, swaddling, pillow, cap — and their condition, usually laceri, tattered. Most babies were abandoned with notes written by priests or midwives, requesting a name, stating when and where the baby was born or found and if the infant was healthy. Babies with contagious diseases, such as syphilis, weren’t turned over to wet nurses. Most died.

Babies were baptized and, until 1825, were given the last name Colombo, for the hospital coat of arms, a dove. Colombo is still Milan’s second most common name. Later babies received last names such as Innocenti, Proietti (thrown away), Esposti (exposed to danger) and Ventura (left to fortune).

Parents usually abandoned their babies with some identifying object. Flores shows me tarot cards, medallions, pictures of saints or of Napoleon or Mary Stuart, scraps of paper or wood, all cut in half, often in zigzags. Mothers kept the other halves to reclaim their babies.

After an infant was weaned, it was given, by mediation of a priest, to an allevatore paid to raise the child until age 15. Presuming coming employment, the child received less money each year. In provincial villages like Cuggiono or Broni, all women worked as wet nurses and allevatori.

Girls older than 15, could remain with the hospital until marriage, working as child assistants or in the kitchen or wardrobe. They received dowries of 100 lire and a blanket. Those who became midwives, received thirty yards of cloth, two blankets and twice the money. They got 88 cents for retrieving an infant, taking it to the hospital and writing the note.

The problem was that half the foundlings died, many in the first hours of life, traveling to the hospital or during the long trip into the country for wet nursing, piled on donkey carts in all kinds of weather. Of those babies never reclaimed, only 20 percent reached the age of 15.

In our time, the United Nations Convention on the Rights of the Child states that “a child shall have, as far as possible, the right to know, and be cared for by, his or her parents.” However, there is no global consensus on putting it into practice. In Italy, by law, a mother can abandon her baby anonymously. High-tech foundling wheels are being installed at Italian hospitals. When foundlings grow up, they’re prohibited from searching for their parents. Thus registers less than 100 years old may not be viewed.

In France, on the other hand, an abandoning mother has, not the obligation, but the possibility of leaving a sealed envelope to be archived, Santa Caterina-style, for her child to open when of age. In this way, a foundling might find comfort one day, reading a note like this one, left long ago in Santa Caterina: “Please accept him with love. It is extreme poverty and illness that force me to take this step.”