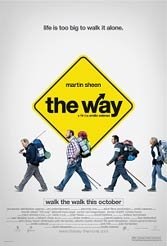 When widower doctor Tom Avery (Martin Sheen), a California country club golfer, learns that his son Daniel has been killed, lightening-struck in fact, while trekking along the age-old Way of St. James (El Camino de Santiago) that snakes from the Pyrenees to the Basque badlands, he flies to France to claim the body. But melancholy Tom decides to go a step further: He’ll follow in his son’s footsteps, hoping to scatter the last of Daniel’s ashes into stormy Biscay seas after reaching Santiago.

Along the way, Tom bumps into comic and earnest wayfarers, each one a prefab caricature on the lookout for awakenings. Skeptical Tom keeps on trekking until his real son, director Emilio Estevez (who plays Daniel in a flashback), starts salting the script with revelatory moments. Faith-bitten Tom begins to see the trek as a life-changer: He’ll never be the man he was before he walked the walk.

While the low-keyed narrative and the situational geography are appealing (the film is anti-ostentatious) the transformational ingredients are lead weights (“You don’t choose a life,” flashback Daniel whispers to Dad, “You live one.”) Sheen has never been much of an inner channel man. Instead, he’s an engaging, outwardly focused actor best cast as a president, a boss, or loner, but not this kind of loner. If Estevez’s goal is to manifest Spain, the Catholic faith, and a sense of penance, mission accomplished (with soundtrack baubles from James Taylor, David Gray and Alanis Morissette). But transcendence is best served with a more feathery touch than the one that guides the male Sheens, who apparently attack pensive and rude with equal vigor.