The war is over 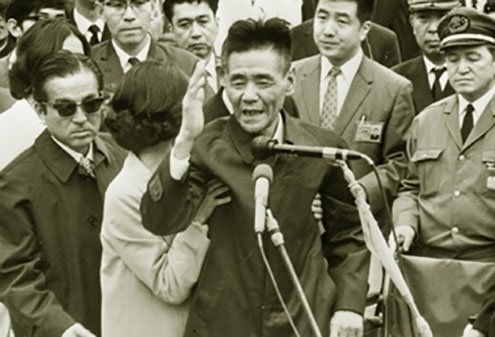 In 1972, Shoichi Yokoi, a Japanese sergeant, was found on Guam. He was unaware that World War II was over and had been hiding in the jungles for 28 years.
O

ver the years I remember reading about Japanese soldiers found from time to time holding out on some jungle island, sometimes a few old men, sometimes just one, all of them unaware the war had ended. It boggled the mind trying to imagine their lives, day after day, month after month, decade after decade, hiding in the jungles of some inhabited place, living on coconuts or occasionally raiding a village for food.

For whatever reason, they’d never found out the war had ended. In some cases their government had tried to reach them to tell them to come home. But the holdouts imagined this must be an enemy trick. Emperor Hirohito himself wrote a message that was copied dropped by the thousands over islands involved in the hostilities. The soldiers were not convinced. They remained in hiding places, guarding the island, sabotaging what they could of the supposed enemy’s activities.

Little could they have imagined that Japan would be transformed from an important empire to a producer of cheap toys and gadgets (if you’re my age you’ll remember when the phrase “made in Japan” was disparaging), to then be reborn into a major industrial nation.

These men seemed foolish to us when we read about them in the 1970s, some 30 years after the end of World War II. How could they possibly have imagined a war dragging on so long? But far from being silly, they were in fact quite courageous. They were convinced, unwaveringly, that they were protecting their families and country from invasion by an evil enemy.

I often think of this story when I’m talking to patients who are still holed up on a “personal island,” fighting a war they don’t know is over. Their behavior puzzles outsiders. As much as they need companionship, many treat all those around them as enemies and keep potential friends at arm’s length. To outsiders they seem stupid, fearful of details from their past and inclined to rehash old battles. In fact, they’re no less courageous and loyal to their cause than the Japanese soldiers.

Wars always produce powerful propaganda. The enemy is frequently portrayed as a child-eating devil eager to destroy a way of life. But propaganda isn’t necessary for wars that occur within an individual’s early relationships.

If such early relationships were with people who seemed nice and loving only to disappear when needed or to turn disloyal when trusted, it’s only natural that a child would seek to create a protective jungle against anyone who later bills himself as nice and loving. Friendly overtures are seen as manipulative moves by a sly enemy — the kind willing to drop leaflets telling you the war’s over.

This happens both in violently destructive family circumstances and in ones that are far less obvious. Kids desperately need a connection with their parents. Once such a bond is forged, many will do anything to maintain it. Some sense their parents seek perfection, whether through top grades (A- will not do) or winning in sports (the gold medal, not the silver). Others may set aside both outside friendships and independence just to play companion to a depressed parent. While these “accomplishments” may earn the child love and admiration, the praise comes with conditions. Parents don’t need to pressure such kids into doing anything. They know their parents’ faces light up only for the A+, for the gold medal, or when their child plays “best friend.”

As adults, such kids continue to apply pressure on themselves — even when they’re apparently independent and living their own with jobs and families. In old age, their parents long gone, many may still see enemies lurking. From their perspective, the conditions of love have not changed. They’re still convinced that if they were to do what they enjoy doing, live life as they wished to, be who they always wanted to be, a disaster of enormous proportions would surely follow.

No matter all the messages to the contrary, for them the war is never over.