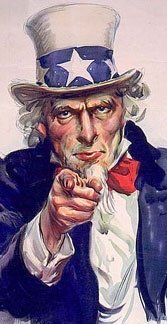 Detail from an American World War I recruiting poster.
F

or two testosterone-driven millennia man’s ultimate rush was war. Imbalances, pride, greed and resentment were focused and exhausted through a single gross channel. That the war-makers were monarchs or revolutionaries mattered less than the production of conflict. The dismissal of composure equaled violence.

Enlightened thinking and the prizing of human life changed that, but only in the West, and only partially. In the middle of vast intellectual progress came the disorienting butchery of World War I. Those killing fields, whose nonchalant savagery shocked both Europe and the United States, brought a respite. In the 1920s and 30s, most loss of composure was economic. But the tangent wasn’t enough. The war legacy remained.

Cometh World War II, which trumped the first by including civilian death in large numbers and featuring the attempted murder of entire races.

The balance changed with the introduction of end-of-days weapons. Their presence fostered a postwar climate that for the first time equated any future loss of composure with the end of the world.

Yet the realization also necessarily altered the substance of national hormones. Head-on wars were no longer feasible. Small surrogates would have to stand in for the coital catharsis of combat and the after-the-fact conciliation. Spears and tanks would have to move from fields and boulevards to side streets and alleyways.

First came mini-wars. The United States fought in Korea and Vietnam. Britain and France clashed with Egypt. Arab states continued their hapless skirmishes with Israel. On the margins, India fought with Pakistan and China. The Soviet Union embarrassed itself in Afghanistan. The humbled British Empire even went to war with Argentina over tiny islands in the south Atlantic, a brief medieval joust. Lately, the U.S. has exercised reprisal muscle in Afghanistan and Iraq.

But greater war, the most traditional representation of loss of composure loss, has been effectively shut down.

Since 1970, its “civil” substitutes have focused on four areas: Terrorism, increasingly broad; economic panic, increasingly linked; various kinds of urban rioting, often hard to predict; and sports, the rule-bound distillation of the gladiatorial need to win.

While terrorism and the response to it dominated the first five years of this century, economic “war-making” and civil strife has lately gained traction.

Stock market ebbs and flows, suggested as harbingers of immense peril, are a form of contained warfare. Markets invite both panic and loss of composure without needing to show actual devastation as proof of woe. Like war, their leaps and lurches excite and confuse. Their front-changing instability is irrationalism without visible tourniquets.

Though economic instability and market volatility reflect real economic woe, the conflict surrogate model is constantly evident. Things of value are suddenly eviscerated, like cities. People at home with their business and lives are gutted. The excitement of so much unsettlement borrows from the mortality’s fiercer dread. It fills in for what cannot be.

London’s recent riots not surprisingly came in the midst of financial turmoil, as if to add a messy exclamation point to the unease and inchoate anger bleeding around the fringes of undirected modern affluence.

Wars were advertised as having pious purpose, national or religious. Financial meltdowns and riots replace those hormonal spills with secular spasms.

But it’s not enough to fill in what was. War’s surrogates, while fierce, lack bettering ends. The anxiety they produce serves no redress. Instead, they erode confidence among the already worried. It’s the shattering of composure without advertising a better tomorrow, a centerpiece of military propaganda.

While war’s aftermath has introduced terrorism and economic turmoil part of the price of new-age peace, giving “At what price, peace?” new meaning, resolution isn’t part of it.

Fidgety and unfocused, 21st century society has few social and political philosophers to make sense of the dramatic changes in the way social belligerence is managed and expressed.

Too bad, because such figures would no doubt recognize market slides and public fears about security — together with mean-spirited political debate — as among the deeper stains of an edgy peacetime. Collective worrying about self and status replaces the war’s more singleminded arousals (in that vein it’s well-worth thanking nuclear states for keeping their arsenals out of emotionalism’s way).

At the same time, the disappearance of a postwar — a fixture that recurred at all stages of human history — condemns humankind to countless tangent apprehensions that exist to contain yesteryear’s battlefields. On the plus side is apocalypse avoided, on the minus the proliferation and “selling” of more and less real crises to keep the war gene at bay.