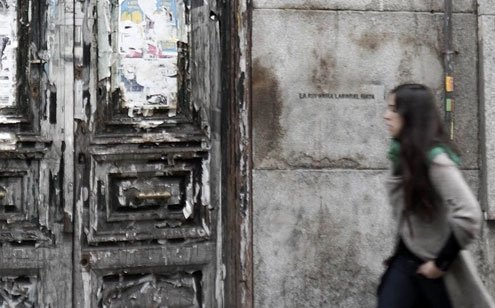 Walking can lead to small if sudden revelations. Photos by Jennifer Allison.
L

ast week while in Palm Springs I did what I do everywhere, weather-permitting. I took a walk. Not a power or workout walk, but just a walk — the kind you take not to get someplace but for its own sake. I’ve always been a restless woman prone to wanderlust. My walks help me organize my thoughts. They also remind me I’m alive and well and belong to something.

In Palm Springs, I was ambling toward the local art museum when I stopped to find a shortcut on my map (the paper kind, mind you). I’m notoriously bad with directions. I can hardly tell north from south, up from down. Since I’m often alone, I’m sometimes disoriented.

“You lost, Sweetie? Need some help?” Near me was a man with a tanned, round and smiling face behind the wheel of a dark green Jaguar. Only it wasn’t a typical Jaguar. It was a Palm Springs Jaguar, a golf cart tricked up to look like a tiny sports car. He had a miniature dog on his lap and a cup of iced coffee in his free hand.

I told him I was fine, that I was just deciding which neighborhoods to walk through. My comment about neighborhoods perked his interest and before long we were discussing which local streets had the best Desert Modern-style houses. I even got the history of (and directions to) Liberace’s villa, which the man told me was “in quite the shambles before the new owners bought it.” I thanked him, waved goodbye to his mini-Jaguar and his fancy mini-lap dog, and continued my stroll.

But now I was smiling to myself. The chance encounter got me thinking of all the characters I’d bumped into over the years, both in the U.S. and overseas.

In Verona, lost as ever, I met a priest and his assistant. I had somehow landed in front of the city’s Community of San Joseph. Not only did I get a tour of the gardens and mosaic studio, but also a private tour of St. Giovanni Calabria’s bed chamber and private library.

Once, strolling through downtown Chicago, I asked a heavyset man in a fur coat in front of me how to get to the city’s Blue Line transit stop. When he turned to face me, I was greeted with a bloodied and battered face. One eye looked ready to fall out of its socket. I also got a big smile. I may not have breathed but I didn’t flinch either, politely holding his dangling, one-eyed gaze. After pointing me in the right direction, he smiled again, wished me a good day and turned the corner, whistling.

In Hawaii I met an old man juggling on the beach. After explaining the complexities of juggling, he told me he’d moved to Hawaii to honor his mother’s dying wish that he quit his job as a Michigan mailman and use her inheritance money to move to Hawaii. He’d lived there ever since, juggling on beaches every day for years. He was too busy juggling to wave goodbye. Maybe jugglers don’t like goodbyes.

A few months ago, walking back to my Lisbon flat after visiting the grocery store on a rainy day, an old woman called out to me to help her step onto the curb. When I reached her side, she grabbed my arm and held on tight, speaking a constant stream of Portuguese. We walked for some time along the slippery sidewalk, and though I apologetically explained I didn’t understand Portuguese she simply patted my arm and kept on talking. When we got to her building, she let go of my arm, smiled, and I continued on my way.

Walt Whitman and Henry David Thoreau have written more about their reflections while walking that I ever will, and I’m grateful to them. I could probably write my own set of poems and books on the characters I’ve met on my treks.

But that’s not for now. Now is about continuing to walk for the sake of walking and collecting experiences along the way, dangling eyeballs and all.