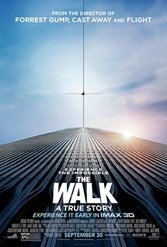 On Aug. 7, 1974, French performance artist and high-wire devotee Philippe Petit strung a cable between New York City’s still unfinished twin towers and cavorted 1,350-feet above Manhattan for nearly an hour. His sneaky band had repeatedly bluffed its way into a complex then under the loose custodial care of construction workers and contractors. While New Yorkers cheered Petit’s feat, his early morning daring was quickly pre-empted by the resignation of Watergate-stained President Richard Nixon the next day. Those were pre-cable TV days and no one had filmed it. In fact, James Marsh’s superb 2008 documentary “Man on Wire” (inspired by Petit’s book “To Reach the Clouds”) had only still images to show for an otherwise visually remarkable story.

Cometh special effects-loving Robert Zemeckis (of 1980s “Back to the Future” fame), who spectacularly digitizes the drama — 3D from on high — while giving it a thriller’s pace and punch. By 1973, when the movie opens, the eccentric Petit (Joseph Gordon-Levitt) was already married to daring do. He’d already made a front-page splash by walking between Notre Dame’s spires in 1971 (“People ask me ‘Why do you risk death?’ For me, this is life.”)

Smitten by the towers and encouraged by fellow street performer and lover Annie (Charlotte Le Bon), Petit schemes and practices in the French countryside before taking his band on the road. Zemickis brings a light if not magically child-like feel to Petit’s lifelong devotion to refusing the impossible, later using technology to ensure viewers go fully vertical. Along the way, he also flashes back to Petit’s French-speaking, circus-influenced youth, tracks the adult Petit as he quarrels with his mentor-father (Ben Kingsley), builds a team, and finally makes his American landfall.

Gordon-Levitt’s Petit is a delight, whipping up a sense of camaraderie and urgency as his flight of fancy takes literal flight. The film is predictably dedicated to the victims of the Sept. 11, 2001 terrorist attacks that destroyed both towers and claimed more than 2,400 lives.