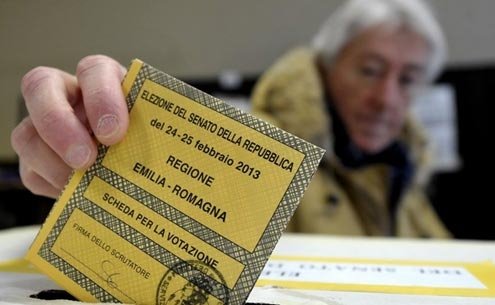 Italy is likely to emerge with a fractured political scene, but what else is new?
M

any friends ask me what I, an Italian resident for more than 20 years, think about the Italian elections, whose definitive results will be out Tuesday. I wish some foreign commentators would ask me too. Italian politics and society are so complex I wouldn’t dare predict an outcome — although many less familiar with the country than I don’t have such qualms.

Unlike me, few reporters and pundits have resided in Italy since back when Silvio Berlusconi was just a rich guy who owned a small newspaper and a successful soccer team.

Recent headlines in the British and American press fret about the instability that will emerge in the absence of a clear majority winner. This amuses me. Twenty years ago, the foreign press considered Italian politics comical. The constantly changing governments — 40 in 40 years — seemed as laughable as the bunga bunga parties. But as Yale political scientist Joseph La Palombara wisely pointed out in a 1987 book, they only looked unstable. The players rarely changed. Giulio Andreotti was prime minister seven times, defense minister eight times, foreign minister five times (among a host of posts).

Though the country’s three main parties volleyed percentage points back and forth, the balance of power changed little. In the first postwar election, held in 1946, the Christian Democrats won 37 percent, the Socialists 21 percent and the Communist Party 18 percent.

In 1976, the Communist Party reached 35 percent, but by 1983 it had fallen back to 30, while the Christian Democrats picked up 33 percent and the Socialists 11.

The numbers coming out of the current vote may well look similar, potentially yielding three major groups, left, right and center, just like the old days.

American and English observers accustomed to two-party systems fail to realize that Italy’s apparent two-party system — Berlusconi and an opposition — is actually an anomaly that dates back only to 1994.

The problem is not instability. The problem is immobility. The stable old days were not good old days. Italy’s economic boom up to the 1980s made political stagnation affordable. Today, Italy can no longer afford the luxury of further postponing pension, labor market and judiciary reform.

Many English-language pundits speak from an echo chamber they share with Italians who speak their language — literally and figuratively. Foreign reporters tend to interview Italian academics, business leaders, and politicians (many with American or British educations) with whom they share assumptions and opinions. Too bad these Italians usually are more in tune with international wavelengths than the Joe Average Italian.

Over the last two decades, study abroad has become almost de rigueur in certain circles in Milan and Rome. But outside these circles, most Italians are ambivalent about and even hostile to the assumptions produced by this small circle (for reasons too complex and longstanding to discuss here).

Here are some other considerations that don’t make it into foreign media.

Italians enjoy voting strategically. They don’t vote out of political passion, but in a more calculated, cynical way, to keep a party or a man from a breakthrough, for example.

The strategy can work. It helped keep the Communists out in the 1970s. What it means now is harder to say. Inside the election booth, passionate supporters of small parties, even those of naysayer Beppe Grillo, can change their minds. They may vote for a larger party out of fear that by voting for a smaller party they’ll give Berlusconi (or the left) a larger majority (I told you it was complex).

Then there’s the voto di scambio, or votes exchanged for cash (or phone cards) or favors. Organized crime is involved here. The Christian Democrats’ fixer in Sicily had well-known Mafia connections (and was assassinated). Berlusconi had his own man in Sicily, who was recently convicted. At this point, just who’s buying what from whom is unclear.

Those who haven’t lived in Italy long may not understand the tribal alliances and group identities that make up right and left. They don’t fall along demographic lines familiar to English-speaking reporters and pundits. For example, areas that were Communist strongholds, such as Milan’s industrial suburbs, are now reliably Berlusconi and Northern League (to the right). No one knows what youth will do. On the web, Grillo and the economist-led Fare per Fermare il declino (“Work to Stop the Decline”) movement have the best Internet reach, but Italy is not yet a fully online country.

The Roman Catholic Church is also a key component, or was. Once priests told congregations how to vote (Christian Democrat). And once the Church enjoyed having Berlusconi’s support against gay marriage and certain bio-ethical issues. But then he went too far and the Church dropped him. During this election, the Vatican finds itself more worried about its own leadership than Italy’s.

Finally, and you heard it here first, Fare per fermare il declino, a reform-oriented movement with a high-profile membership that since its formation in July through February signed up 75,000 members, may do surprisingly well. Though Italy’s mainstream press studiously ignored it, Berlusconi attacked it hard, evidently considering it a threat.

If successful in entering parliament, commentators will say Fare per fermare il declino came from nowhere. It didn’t.

Berlusconi did not invent the partisan press. That has been in Italy longer than even I have.