The “voice” of music 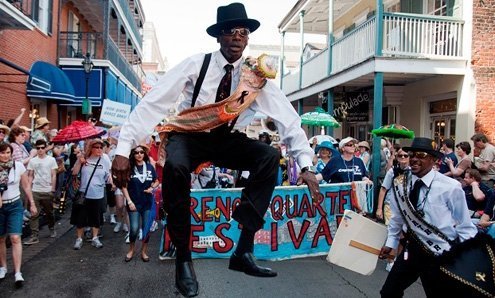 The annual French Quarter Festival is a showcase for Louisiana music.
I

just returned to Rome from a trip to New Orleans so this column is not about law but music.

While visiting my son Jacob (see “Southern Notes”) I took in the French Quarter Festival, which promotes itself as the largest showcase of Louisiana music in the world. Some 1,700 local musicians gather to play Zydeco, gospel, R&B, traditional and contemporary jazz, New Orleans Funk and other genres on 23 stages over the course of four days in one of the largest self-funded events in the nation. The festival didn’t let me down, nor did the American South.

As in Southern Italy, the lands that begin south of Rome, I found an openness and warmth among those I met. Theirs was a stylish hospitality. It lifted and lightened me.

I’ve always loved R&B and some of the other music styles on display in New Orleans. But on this trip I heard a spirit in the music that I hadn’t distinguished previously. It was the sound of survival.

Visiting Arkansas, Mississippi and now Louisiana, always let me in on the sense of tragedy that seems somehow unique to the region. This trip just deepened that sense.

Just after my arrival in the Big Easy, while driving through the French Quarter before the festival began, my Uber driver spoke of having watched members of her family drown during Hurricane Katrina in 2005. She was just now regaining her emotional and economic moorings she said, more than 10 long years after the storm had crushed her city.

Four years ago, when Jacob was working for “Teach for America” in Mississippi, he mentioned a student of his who one day looked particularly ragged and was sleeping at his desk. Awoken and asked why he was unkempt and tired, the young boy replied that the home he and his family lived in had burned down in the night. This kind of story, in which homes are shacks, parents go absent and violence is a part of life, was all but commonplace in the community where Jacob taught.

The backdrops of slavery, floods and hurricanes are historical truths of the region. And while such events are the source of great suffering, they also provide a deep well of musical inspiration to those who experienced them first hand, still carry their scars, or are even now touched by them daily.

It was that fierce inspiration I heard from certain musicians. Their playing and singing soared and seemed like a celebration of being.

A dear friend of mine, Bill Bucci, is an experienced alto saxophone player who has studied and played with great jazz musicians such as Earl Swanson, Gerry Weil and Marcello Rosa in the U.S., Europe and Venezuela. His great grandfather fought alongside Giuseppe Garibaldi during the Risorgimento that led to the unification of Italy and his family is still deeply rooted in the southern town of Guardialfiera, in Molise.

A purist in every sense of the word, Bill distinguishes between musicians who are technical wizards eager to show off their skill — and there are many such players — and those who know how to use their music to express a personal story. Of these there are few.

What may have been most telling in New Orleans were street musicians, as well as those I listened to at small non-festival venues outside the French Quarter. Hearing these impassioned players seemed to me like discovery itself, as if I was being told a story for the first time, and somehow that story was meant for me and me alone.